Draft Watch: The rise of Leonardis 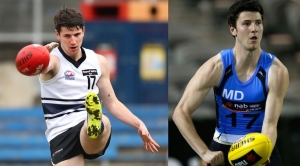 Tyrone Leonardis has surprised even himself with how he’s burst onto the AFL Draft radar this year.

The classy half back played eight TAC Cup matches in 2014 for Northern as a 17-year-old and initially wasn’t expecting much more than to earn a few games for the Knights again in 2015.

But that all changed very quickly.

After an impressive start to the season, Leonardis earned selection in five matches for Vic Metro at the U18 Championships and soon found himself invited to the NAB AFL Draft Combine.

“Getting invited here was unbelievable; I’m so proud of myself right now,” Leonardis said recently at the Combine.

“Just the confidence I gained from the start of the year to now, it grew every week. Every training session I’ve gotten better and better.

Of that, there’s no doubt.

The Bundoora product caught the eyes of recruiters this year through his skill with ball in hand and ability to break the lines with pace and agility from half back.

He demonstrated some of his strengths at the Combine, finishing equal-second behind Dandenong Stingray Kieran Collins in the clean hands test and equal-fifth behind four players in the goalkicking test.

Leonardis would like to emulate a couple of fellow dangerous left-footers who have become weapons in Hawthorn’s premiership teams of recent years, Grant Birchall and Isaac Smith.

“I like watching them – they’re both left-footers breaking the lines and that’s what I want to do if I make that level,” Leonardis said.

“(I see myself as a) breaking-the-lines half-backer, using my speed and my strength to get through packs.

“My fitness can probably improve a little more and (kicking on my) opposite side could improve more, but I think I’ll get heaps more confidence (in an AFL environment), so I’ll probably improve with that as well.”

Leonardis showed he could mix it at the highest underage level after breaking into the Vic Metro team in Round 2 of the U18 Championships.

He overcame a touch-up from Gippsland Power key forward Harry McKay – a clear mismatch for the 182cm defender – in a Championships practice match against Vic Country and missing a berth in the Round 1 Metro team to average 13 damaging disposals through the remaining rounds.

The highlight for Leonardis was Metro’s five-point comeback victory against South Australia at Etihad Stadium in the final Championships match, but just playing one representative game seemingly would’ve pleased him.

“Playing against the best talent in Australia – what more could you ask for, really?” Leonardis said.

Well, perhaps this humble young man has a chance to find out come draft day in a few weeks.