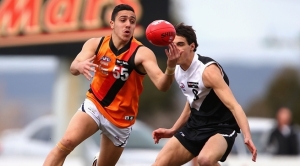 Melbourne’s outer northern suburbs are falling in love with football thanks to young talent like Hisham Kerbatieh.

The Calder Cannons small forward grew up in the ethnically-diverse area of Meadow Heights next to Broadmeadows and played his junior football in nearby Hadfield.

A practising Lebanese Muslim, the 18-year-old has noticed a big change in his community in recent years.

“There are some footballers from around my area – Ozgur Uysal (from Coburg in the VFL) and a couple of Muslim guys,” Kerbatieh said at the recent NAB AFL Draft Combine.

“There’s a lot of love around the community; you go around there, they’re always talking about football and it never used to be like that.

“So when they (aspiring footballers) see us (doing well), it’s probably a bit of a change in the community.”

Kerbatieh’s life has certainly changed over the last two years.

The 177cm livewire has booted 46 goals in 24 games during his time at the Cannons, as well as nine goals in five games for Vic Metro at this year’s U18 Championships.

He also spent increased time in the midfield as the 2015 TAC Cup season progressed, producing standout performances against the Bendigo Pioneers in Round 8 (24 disposals, three goals) and the North Ballarat Rebels in Round 17 (17 disposals, five goals), to showcase his talent.

It all resulted in an unexpected invitation to test in front of AFL recruiters at last month’s Draft Combine.

“(My dream was) probably just playing football, when I was younger,” Kerbatieh said.

“I never really thought I was even going to be at the national Combine, so to come here is a little bit different being the only Lebanese Muslim.

“It’s a bit different for me, with them (other players) not knowing what I eat and what time I need to pray.”

Kerbatieh handled the demands of both his religion and the high-pressure environment to show his athletic gifts at the Combine, finishing in the top 10 for the relative running vertical jump and 20m sprint tests.

He admits he needs to improve his endurance running ability if he wants to move into the midfield at the elite level, and that clubs probably see him “as a small forward, tackling and kicking goals” at this stage.

In that way, Kerbatieh looks to current AFL stars such as Hawthorn’s Cyril Rioli and Collingwood’s Jamie Elliott as inspiration for his own football.

“He’s probably one of my biggest role models, playing AFL football and what he does for the community,” Kerbatieh said.

“Hopefully I can be like him one day – even if I don’t play AFL, just helping out the community and being a role model.”

That already seems to be the case, with Kerbatieh winning the Bachar Houli Academy Medal last year for his achievements on and off the field as a Muslim footballer.

He’s handled the demands of balancing his religion and playing elite underage sport with aplomb so far, and Melbourne’s ethnic communities – as well as the game of football itself – will likely reap the benefits for years to come.