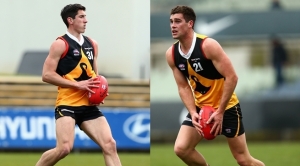 The Dandenong Stingrays key defenders first met while playing cricket as under-12s and, several years down the track, are now both tipped to be selected at the pointy end of the upcoming AFL Draft.

“Kieran and I go way back,” 17-year-old Weitering said at the recent NAB AFL Draft Combine.

“U12s cricket I reckon was the first time we sort of hit out.

“I went to England with him in 2012 when we were 14 and had a tour over there (with the Mornington Peninsula Cricket Association), and then when football started getting serious, we started playing together more and getting to know each other more.

“He’s just been not only a fantastic teammate and player to play alongside, but a friend as well.”

17-year-old Collins said the pair’s shared history allowed them to develop a very effective dynamic in the back half for both Dandenong in the TAC Cup and Vic Country at the U18 Championships, where both were named in the All Australian team.

The strongly-built 193cm defender regularly locked down on the opposition’s best key forward this year, allowing 195cm Weitering to use his ability to read the play and take intercept marks.

“I think we know each other well and really worked well as a team down back,” Collins said.

“It started back in cricket... I think we became best friends since (the MPCA tour of England) and happened to come even closer through Stingrays and Vic Country for the U16s.

“I think my defensive ability, and ability to lock down an opponent and do my role for the team (is my biggest strength).

“(But) Jacob’s ability to take the game on and become an attacking defender – I’ve taken that out of his book and really looked to improve that on my side of things, and he’s really helped me with that.”

Collins said Vic Country’s Round 3 win over Vic Metro at the U18 Championships was one of his most memorable matches of 2015.

He and Weitering were arguably the most influential players on the ground, with Collins racking up 21 disposals at 95 per cent efficiency and taking 10 marks (including four contested) to repeatedly stop and repel Metro’s forward forays.

Weitering, Vic Country’s captain, had 14 disposals at 93 per cent efficiency and took six marks (two contested) that day as his team recorded the third of six victories in an undefeated national title campaign.

The likely no.1 draft pick furthered his credentials as an all-round prospect by starring at the Championships while leading Country to the ultimate success.

“I can’t take all the credit for that, because it was the people within the program... and the players,” Weitering said.

“It helps when you’ve got five players from the Vic Country back line playing in the Dandenong Stingrays back line too.

“It definitely isn’t a one-man job and I’m not going to take credit for stopping (key forwards) because there’s people like Kieran Collins there who’s holding them out and allowing me to take the marks and look good.

“So it’s definitely a team effort down in the back six, whatever team I’m on.”

These friends have shown they work well together on the football field, but while Weitering has received the bulk of the plaudits this year, how did Collins match up against him on the cricket pitch?

“I think we were pretty close in cricket,” Collins said.

It’s perhaps no surprise: While Weitering is still the all-rounder on the football field, Collins is still diligently trying to take down the big guns.

Some things haven’t changed for the pair as this special sporting journey continues on.