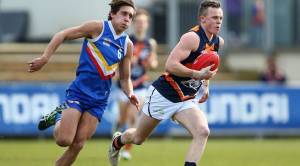 The season will kick off with a full round of matches on the Easter weekend, starting with Calder Cannons versus Eastern Ranges on Easter Thursday, March 24.

The traditional Country and Metro Rounds will be held on the same weekend of April 2, with all six country teams heading to Queen Elizabeth Oval in Bendigo on the Saturday April 2, and all metro teams going head-to-head across Ikon park and RAMS Arena on the Sunday April 3.

Interstate sides New South Wales / ACT, Queensland, Tasmania and Northern Territory will each play two games in the competition between Rounds 3-5 as a warm-up for the NAB AFL U18 Championships – with the Championships kicking off for Vic Country on June 5 and Vic Metro June 12.

AFL Victoria CEO Steven Reaper said 2015 was a successful year for the TAC Cup with 48 players drafted from the competition and development opportunities provided to a large number of local and interstate players.

“The competition again produced the most draftees from across Australia which highlights the professionalism in our regions - consistently developing players ready for AFL selection,” Reaper said.

“It is pleasing to see over 61% of first round draft selections come from the TAC Cup, with the undefeated Vic Country Academy team producing half of the top 10 selections in the draft.”

In the various NAB AFL Drafts, 36 players were selected in the November Draft, and another 12 were given an AFL Rookie position.

“We congratulate the work done by all our head office staff and those in the regions, from the High Performance and Talent Managers, to the coaches and general staff who help educate these young players in our system,” Reaper said.

“We look forward to seeing the next crop of potential draftees take to the field in AFL Victoria’s TAC Cup competition throughout the 2016 season.”

For those TAC Cup players that did not have their names called out on draft day this year, the AFL dream is not over just yet. The likes of Andrew Gallucci (Calder Cannons 2012 graduate) and Adam Marcon (Northern Knights graduate 2010) prove AFL clubs are continuing to look at late developers at state-league level.

“The 2015 AFL Draft proved again that the Peter Jackson VFL competition is a proven pathway for TAC Cup graduates to further develop their skills and be drafted,” Reaper said.

“It is pleasing to see our VFL clubs give more opportunities to TAC Cup graduates, which helps grow the talent pathway in the state.”

The Grand Final will be played on Sunday September 25, and there will be five development weekends across the season.