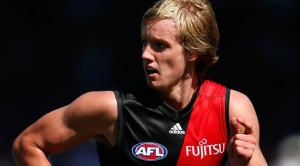 Eight former TAC Cup players who were first-round selections in the 2015 AFL Draft played in week 2 of the NAB Challenge on the weekend, giving fans of several clubs a glimpse into a promising future.

A host of Carlton’s TAC Cup draftees made appearances in the club’s 60-point loss to Essendon at Ikon Park on Sunday, headlined by Jacob Weitering (pick no.1, AFL Draft). The former Dandenong Stingrays key defender looked typically assured down back in his 83 per cent game time, with 19 disposals at 74 per cent efficiency, nine marks (two contested), three rebound-50s and three one-percenters.

On the other side of the field, many eyes were on Essendon’s Darcy Parish (pick no.5, AFL Draft - pictured). The former Geelong Falcons midfielder had 18 disposals at 72 per cent efficiency, five marks and four clearances in just 58 per cent game time.

Kieran Collins (pick no.26, AFL Draft) made his first appearance for the Western Bulldogs in the club’s 31-point victory over GWS in Canberra on Thursday night. The burly former Dandenong Stingrays key defender fitted into the back six well with 10 disposals at 90 per cent efficiency, four marks and three one-percenters in 80 per cent game time.

Ex-North Ballarat Rebels midfielder Jacob Hopper (pick no.7, AFL Draft) appeared for the Giants in the same game. The GWS Academy graduate had seven disposals at 100 per cent efficiency and booted a goal in 55 per cent game time.

Daniel Rioli (pick no.15, AFL Draft) found more of the ball in his second pre-season appearance for Richmond on Saturday than in his first game last week. In 72 per cent game time, the dynamic former North Ballarat Rebels forward collected 11 disposals (after having four last week) and kicked a goal in the Tigers’ 71-point defeat of Hawthorn in Beaconsfield.