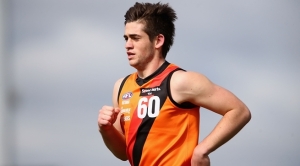 The Cannons boast some promising tall prospects who could lend plenty of goalkicking firepower to the club's 2016 finals bid.

After a Grand Final showing in 2014, the Cannons just made it into the top eight despite a losing record last year. They knocked off eventual premiers the Oakleigh Chargers by 20 points in Round 14 but later succumbed to the rampaging Eastern Ranges in an elimination final by a margin of 34 points.

Talent Manager Ian Kyte said the 2016 group boasted depth and was similarly even across the board to the 2015 group. At the top end, Kyte is excited to see Mitch Lewis and Tom Burnside, two top-age tall forward/ruck options in action. Lewis played nine games and kicked six goals last year, while Burnside – who Kyte said was “very agile” for a player close to 200cm – made seven appearances as a 17-year-old.

Perhaps the one for AFL Draft watchers to keep an eye on will be 192cm forward Karl Brown, who returns as an over-age player after booting 36 goals in 11 games in his first TAC Cup season. “He’s lost about 15kg over the two years and is now looking like he might fulfil that potential he showed previously,” Kyte said of Brown. “I think Karl will be one who’ll be talked about by people as the year goes on.”

The club’s other 19-year-olds for 2016 are: James Peters, returning to the field after suffering a season-ending ankle injury in April 2015; Matthew King, who came into the system for two games late last season; Ben Ronke, who spent last year playing local football with St Bernard’s; and Mitch Barnes, a former state-level basketballer who hasn’t played football for seven years. Kyte said the raw Barnes was “starting to show a little bit of potential” on the training track.

Senior coach Andrew Johnston will have some new assistants surrounding him this year, with former Carlton forward Lance Whitnall in charge of the forward line, Damien Keeping moving up from Calder’s U16 program and Nick Rutley leading the midfield group alongside part-time assistant, former Western Bulldogs champion Scott West.

The Cannons open their season on Thursday March 24 against the Eastern Ranges at Rams Arena.