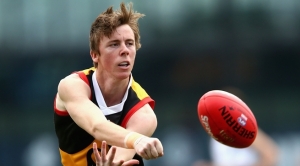 After boasting a 2015 squad packed with talent, the Stingrays will again field a team featuring a number of exciting AFL Draft prospects this year.

A Stingrays team packed with future AFL draftees secured a top-two finish after the 2015 home-and-away rounds. But following a tense six-point victory over the Murray Bushrangers in a qualifying final, they couldn’t get past the Eastern Ranges on the penultimate weekend of the season, losing by 28 points.

Talent Manager Mark Wheeler said the Dandenong’s 2016 squad boasted perhaps even more depth than last year’s. He said “a lot speed and grunt” had been added over the off-season to complement the existing top-end quality of the list.

Wheeler expects four talented youngsters – Hunter Clark, Oscar Clavarino, Aaron Darling and Luke Davies-Uniacke – to play from Round 1 in their bottom-age seasons, with hard-running defender Clark and big midfielder Davies-Uniacke the stand-outs. Wheeler gave them what is certainly glowing praise given the club’s successful record in previous AFL Drafts: “They’re as good as I’ve seen.”

Among the top-age Stingrays, Josh Battle and Myles Poholke should have draft watchers interested this year. According to Wheeler, 190cm half forward Battle has already shown “he’s going to be an early draft pick”, while strong midfielder Poholke’s addition to the Level Two AFL Academy squad late last year has seen him come back from an American training camp in January “more professional”. 189cm utility Liam McKay is another player Wheeler is excited to see in action.

Mitch McCarthy returns to Dandenong as a 19-year-old after pursuing his dream of playing college basketball in the US last year. “He’s elite in his jumping ability, pretty freakish with his hands and has a side step a bit like Nic Naitanui’s,” Wheeler said of McCarthy. Thomas Glen and Thomas Jok – both in draft contention in 2015 – will also be over-age players in 2016, along with Travis Young and former Sandringham Dragons ruckman Dylan Atkins.

The Stingrays open their season on Saturday March 26 against the Gippsland Power at Morwell Recreation Reserve.