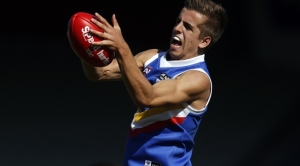 The youth selected in last year's Ranges Grand Final team could be a sign of more success to come for the region in 2016.

After missing the finals in 2014, the Ranges came from fifth position after the home-and-away rounds to make last year’s Grand Final, but lost to the Oakleigh Chargers by 12 points. They had previously stunned some fancied teams in the finals, defeating the Calder Cannons by 34 points, the Geelong Falcons by 54 points and then the Dandenong Stingrays by 28 points.

That Grand Final team included nine 17-year-olds and three 16-year-olds, which Talent Manager Len Villani said bodes well for Eastern’s prospects in 2016. “They’re now the nucleus of our side this year,” Villani said. “So if we stay fit and healthy, I think we’re going to be a pretty solid team come September. I’d be disappointed if we weren’t around the mark again.”

2015 Vic Metro representative Jordan Gallucci headlines the players to watch at the Ranges. A powerful half back who will likely move into the midfield this year, Gallucci “will probably break the Draft Combine record with his vertical leap” according to Villani.

Versatile midfielder Dylan Clarke – the brother of 2015 North Melbourne draftee Ryan – and key defender Jack Maibaum are a couple of the club’s other impressive youngsters. “Maibaum did a real number on (Brisbane Lions key forward) Josh Schache up at Murray last year and then on (Carlton draftee) Charlie Curnow in the second week of the finals as well,” Villani said.

Former Ranges captain and athletic tall Liam Jeffs is back as an over-age player after a season interrupted by glandular fever and various foot and leg injuries. “Just scrap 2015 and look out in the early part of 2016 for Liam Jeffs,” Villani said. Also returning is defender Kane Keppell, an important player in last year’s finals series who Villani said “is going to be one who imposes himself physically on the competition”. Jade Connolly and Nathan Mullenger-McHugh will be Eastern’s other 19-year-olds this year.

The Ranges open their season on Thursday March 24 against the Calder Cannons at Rams Arena.