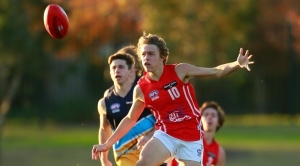 The Power will be looking to several highly-rated youngsters to help the club reach the TAC Cup finals again in 2016.

2015 was a season of what might have been for the Power, losing five games by 10 points or less as well as being involved in a draw. They still did enough to finish seventh after the home-and-away rounds but were beaten by the Oakleigh Chargers by 78 points in an elimination final.

Talent Manager Peter Francis compared Gippsland’s 2016 list similarly to last year’s group, which included four selections in the top 50 of the AFL Draft. “We think we’ve got some real talent there and our best team is pretty handy,” Francis said.

At the top-end of that team will be 2015 U18 All Australian and TAC Cup Team of the Year selection Ben Ainsworth. The classy small forward had an exceptional season as a 17-year-old, one that would have him “high on the radar of recruiters” according to Francis.

Will Leslie is another of the Power’s potential draft prospects. The versatile utility provides something different to his brother, third-year Gold Coast Suns key-position player Jack. “Will’s not as tall as Jack but is probably a little more adaptable in the positions he can play,” Francis said. “He can play through the midfield, half back and half forward.”

2015 Vic Country representative Deven Costigan has been invited back to Gippsland as an over-age player after being in draft contention last year. Francis compared Costigan to Essendon’s Martin Gleeson in how “he has that light frame but is really quick, has beautiful skills and is as brave as they come”. Ruckman Josh Patullo is also back and will be used more as a key-position player this year, while midfielder Tate Marsh will go around again after back stress fractures limited his top-age season. “He’s a really exciting talent, one we think could be drafted,” Francis said of Marsh. Kieren Byers and Ryan Hearn are others to be invited back to the club as 19-year-olds.

The Power open their season on Saturday March 26 against the Dandenong Stingrays at Morwell Recreation Reserve.