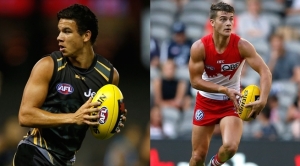 The weekend’s final NAB Challenge matches gave the best indication yet of which 2015 TAC Cup draftees are in line to represent their new clubs in Round 1 of the AFL season.

Former North Ballarat Rebels livewire Daniel Rioli (pick no.15, AFL Draft - pictured, left) looks the front runner to claim a small forward spot in Richmond’s Round 1 team after playing all three of the Tigers’ pre-season games. Rioli had 12 disposals in their 48-point loss to Port Adelaide at Etihad Stadium on Thursday night and demonstrated his ability to apply pressure with four tackles in 83 per cent game time.

Ex-Dandenong Stingrays key defender Jacob Weitering (pick no.1, AFL Draft) will likely be part of Carlton’s Round 1 back line alongside talls Michael Jamison and Sam Rowe after a second assured pre-season performance on Friday night. Weitering’s aerial ability was again on show in the Blues’ 22-point loss to Sydney at Etihad Stadium, taking seven marks to go with 15 disposals at 87 per cent efficiency in 74 per cent game time.

In the same match, Swans surprise packet Tom Papley (pick no.14, Rookie Draft - pictured, right) hit the scoreboard again after booting two majors against GWS last week. The former Gippsland Power small forward finished with one goal from his nine disposals in 74 per cent game time to press his claims for the spot in Sydney’s forward line that would likely have been taken by the injured Gary Rohan.

Meanwhile for the Saints, former Northern Knights captain Jade Gresham (pick no.18, AFL Draft) made the most of limited game time (38 per cent) in his second pre-season match to rack up 11 disposals at 91 per cent efficiency, seven marks and four inside-50s.

Ex-Geelong Falcons midfielder Rhys Mathieson (pick no.39, AFL draft) suffered a fractured cheekbone in a bump from GWS star Jeremy Cameron in Brisbane’s 39-point loss to the Giants at Metricon Stadium on Sunday. Mathieson immediately left the field following the third-quarter hit with six disposals and three tackles to his name and will likely miss the start of the season.

Lions teammate and former Murray Bushrangers key forward Josh Schache (pick no.2, AFL Draft) played 87 per cent game time on Sunday, kicking a goal from nine disposals. He looks to be in line for a spot in Brisbane’s front half for 2016 alongside talls Josh Walker and Jonathan Freeman.

Ex-Eastern Ranges forward Blake Hardwick (pick no.44, AFL Draft) showed glimpses of his class in the Hawks’ 45-point victory over North Melbourne at Etihad Stadium on Saturday night. In his second pre-season hit-out, the TAC Cup’s leading goalkicker in 2015 booted 1.1 from six disposals and two marks inside 50 in 44 per cent game time.