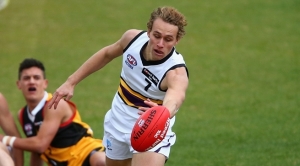 New Bushrangers coach Leon Higgins has some serious talent at his disposal in 2016.

The Bushrangers suffered a couple of agonisingly close losses in finals last year after a successful home-and-away season resulted in a third-placed finish. They lost by six points to both the Dandenong Stingrays in a qualifying final and the Oakleigh Chargers in a semi final.

Leon Higgins now takes the reins after the departure of six-year senior coach Darren Ogier. The former Sydney and Hawthorn AFL player has worked at Murray since 2008 and coached the undefeated Vic Country team at the 2015 U16 Championships. Talent Manager Lee Fraser said Higgins would continue implementing the development philosophy of Ogier and would have “a real focus on the contested side of the game”.

The new coach has some serious talent at his disposal too, with key contributors to last year’s undefeated U18 Vic Country team Will Brodie and Jy Simpkin in AFL recruiters’ sights. Brodie is a strong inside midfielder and Simpkin a dynamic small forward/midfielder, while Zac Sproule is another for draft watchers to keep an eye on. A GWS Academy member, Sproule kicked 16 goals in eight games as a key forward in 2015 but Fraser said “he’ll show a bit more flexibility this year playing forward and back”.

A player recently in draft contention, Lachlan Tiziani, will return to the Bushrangers as an over-ager in 2016. According to Fraser, the small defender “wasn’t far off the mark” last year but will need to round out his game. “Lachlan demonstrated some really good AFL attributes in 2015, but part of his development will be to play as an inside midfielder so he’ll do some work in that area,” Fraser said. Former basketballer Trent McMullin and injury-plagued half forward Luke McKeown are Murray’s other 19-year-olds.

Fraser said the balance of this year’s group across all areas of the ground would be a strength, pointing to the likes of Max Lynch up forward, Ryan Garthwaite down back and Harry Morrison in the midfield as those who could help bring the club success.

The Bushrangers open their season on Saturday March 26 against the Bendigo Pioneers at Deakin Reserve.

* Photo: Will Brodie hunts the ball for the Murray Bushrangers in 2015