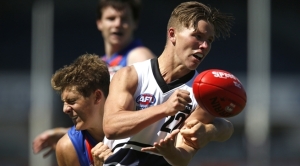 The Knights are hoping players in their 2016 group can follow in the footsteps of the club's 2015 AFL draftees, who all appeared in the recent NAB Challenge.

The Knights missed the finals for the second straight year after winning just two of their first 15 games in 2015. They finished the season in form though, defeating the Bendigo Pioneers by 83 points in Round 17 and the finals-bound Gippsland Power by one point in the final home-and-away round.

Northern’s five AFL draftees from that group have since played in at least one NAB Challenge match this year and Talent Manager Peter Kennedy said several 2016 top-age players could follow in their footsteps. One of them is Luke Bunker, an inside midfielder who Kennedy said has a very good kick and will be one of the club’s “leading players”.

Little will change on the coaching panel surrounding senior coach Andrew Shakespeare, but former Australian lacrosse captain Darren Nicholas has taken up a role at the club doing team-building and leadership work with the players.

The Knights open their season on Saturday March 26 against the Sandringham Dragons at Ikon Park.

* Photo: Corey McKay handballs under pressure for the Northern Knights in 2015