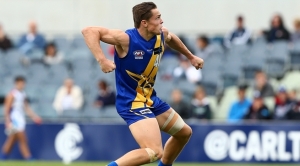 The Western Jets made a mockery of their 11th-placed finish last year by toppling the reigning premiers by 26 points on Saturday.

The Jets reaped the benefits of exposing plenty of bottom-age players to TAC Cup football in 2015 as many of their top-agers ran the Oakleigh Chargers off their feet in a see-sawing contest at Ikon Park.

While Oakleigh – boasting a wealth of top-age talent that tasted premiership success last season – won the first and third quarters, Western took the honours in the second and final stanzas, even holding the Chargers to just two behinds in the last term to close the match out in style.

Torin Baker’s team showed just how quickly fortunes can change in the TAC Cup, playing a scintillating brand of football that was in stark contrast to 2015. The Jets regularly thwarted Oakleigh’s forward forays before launching stunning counter-attacks through the corridor that often ended in pinpoint delivery to leading forwards.

The Sandringham Dragons suggested they should improve on last year’s ninth-placed finish with a brilliant display against the Northern Knights in the second match of Saturday’s double-header at Ikon Park.

As soon as Sandringham piled on three goals in the opening minutes of the game, it was clear the club’s 2016 outfit would be a vastly different proposition for opponents.

Driven by a deep group of talented midfielders and some athletic talls inside 50, the Dragons simply ran away from the Knights with a 15-goal second half to record a 90-point triumph. At least for now, they sit handsomely atop the TAC Cup ladder with a percentage of 270.

Also on Saturday, the Dandenong Stingrays scraped past the Gippsland Power by 12 points at Traralgon Football Ground despite having three fewer scoring shots.

The lead changed five times in a tense final quarter and the game was still in the balance 20 minutes into the term with Dandenong only a point in front, but the Stingrays managed to find the two crucial majors required to seal victory.

In the season opener at Rams Arena on Thursday night, last year’s grand finalists the Eastern Ranges put the foot down after half time against the Calder Cannons to run out 41-point winners. Calder led by 11 points at the main break but couldn’t match Eastern’s devastating 14-goal second half.

Round 1’s other matches on Saturday saw the Geelong Falcons hold the North Ballarat Rebels at bay by 28 points at Simonds Stadium and the Murray Bushrangers account for the Bendigo Pioneers to the tune of 68 points at Deakin Reserve.

Geelong spoiled new North Ballarat head coach Gerard FitzGerald’s return to the TAC Cup despite a wayward performance in front of goal – the Falcons’ 39 scoring shots to the Rebels’ 21 meant the final margin could have been much greater than it was.

Meanwhile, the TAC Cup’s other new head coach for 2016, Murray’s Leon Higgins, enjoyed an easier first day at the office as his troops led the Pioneers from start to finish.