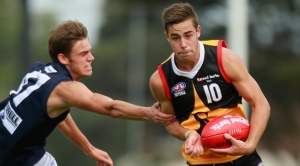 Comprehending the collective quality of the NAB AFL Academy group can be overwhelming, even for those in the Academy itself.

Packed with 60 of Australia’s best under-age footballers, the Academy prepares them for the elite level by developing their football and personal skills over a 12-month program under the leadership of former Adelaide coach Brenton Sanderson.

The quality of the program struck Dandenong Stingrays midfielder Myles Poholke when he attended the Academy’s high-performance US training camp from January 11-26.

“It was a pretty unreal experience,” Poholke, 17, said of the camp, which involved a week of training at the elite-level IMG Academy in Bradenton, Florida.

“It was pretty surreal being over in the States firstly, and then with all the blokes around you – the best kids in the country, I suppose – it hasn’t really sunk in yet that I’m a part of that group.”

Poholke’s break-out 2015 season saw him play 12 TAC Cup matches in a strong Stingrays outfit as a midfielder/forward, kicking 10 goals and averaging nine disposals and seven marks per game. He missed the club’s run to a preliminary final after dropping out of the team with illness in the penultimate home-and-away round.

Poholke’s performances saw him rewarded with a place in this year’s Level Two AFL Academy group of 35 players eligible to be selected in the 2016 NAB AFL Draft.

“It was a massive shock for me,” Poholke said of his selection in the squad.

“I went into the year with a goal of playing three TAC Cup games so to play more than three games then play for Vic Country and get into the Academy was unreal.”

Having played most of his junior career as a forward, Poholke’s marking and goal sense are two of his footballing strengths. Since moving into Dandenong’s midfield though, his ability to dispose of the ball in contested situations has also shone through.

But his experience on the Academy camp taught him what he needs to work on to reach such a level. Indeed, Stingrays Talent Manager Mark Wheeler said he thought Poholke had returned “more professional” and that he “now understands what it’s like to be an elite footballer”.

“I definitely need to get my endurance up,” he said. “It’s not up to scratch at the moment.

“The intensity level of training (with the Academy) just lifts you as an individual, so you kind of rise to their standards. Then it’s just up to you whether you want to keep to them or not.”

Luckily for Poholke, he’ll be playing against 12 other Level Two Academy boys regularly during the TAC Cup season – the ideal comparison for how his standards match up to theirs.