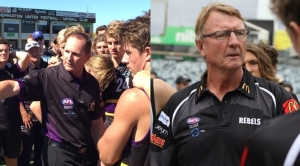 One spent 17 years at Victoria Police working as a Youth Officer and the other has spent 17 years coaching North Ballarat’s high-level football teams with stunning results.

The Murray Bushrangers’ Leon Higgins and North Ballarat Rebels’ Gerard FitzGerald both pride themselves on building meaningful relationships with those they set an example for.

Higgins, 47, has built important relationships by working with at-risk young people facing significant life challenges. FitzGerald, 58, has done so by consistently getting the best out of his VFL and TAC Cup players.

Higgins said his experiences at Victoria Police helped him build his understanding of the pressures young people – including high-level sportspeople – have to deal with.

“I dealt with all different sorts of scenarios (at Victoria Police),” Higgins said. “Some pretty serious family violence stuff, into criminal behaviour, kids displaced from home.

“While some of my players’ issues aren’t as challenging as those of young people I’ve worked with in the past, I think they certainly have issues of their own to work through.

“They have to deal with expectation from within the footy club and within their families and friends, and almost inevitably you’re going to have to deal with failure along the way. Whether that concerns selection in the TAC Cup team or Vic Country selection or being selected as a drafted player, somewhere along the line most of them will have to face the fact they haven’t achieved their goals and will have to reset.”

As a result, Higgins said he’d try to stay aware of issues in his players’ personal lives that might impact on their football performance. It helps that the former Sydney Swans and Hawthorn player already knows much of the 2016 group through his role in development at the Bushrangers last year.

In fact, Higgins has worked at Murray in some capacity since 2008. He started by doing line coaching for the U18 team and later coached the club’s U16s for four seasons. In 2015, he also coached Vic Country to an undefeated record in the NAB AFL U16 Championships.

Higgins will take over from six-year head coach Darren Ogier, who oversaw the development of AFL draftees such as Shaun Atley, Caleb Marchbank, Josh Schache and Clayton Oliver.

“Darren was terrific with his communication and his relationship with players, and that’s something we’ve tried to continue,” Higgins said.

“I’m also really strong on performing the basics of the game really well – making good decisions under pressure and defending as an individual and as a team.”

At the Rebels, FitzGerald takes the reins from 2014 and 2015 TAC Cup Coach of the Year David Loader. It’s a return to the position he occupied at the club in 2005-06 between long stints coaching in the VFL (FitzGerald is the record holder for most VFL/VFA games coached with 345).

The man who led the North Ballarat Roosters to premierships in 2008, 2009 and 2010 said he shared a strong connection with Loader in terms of their football and coaching philosophies.

Even while at the Roosters, FitzGerald worked closely with the Rebels on developing a pathway for the region’s under-age footballers to progress to its VFL team. He said this had made the transition to his new role easier.

“I’m very proud of the development program we have here at North Ballarat,” FitzGerald said. “It’s stood the test of time and is well regarded.

“The fact I’ve been raised (as a coach) alongside the TAC Cup as soon as I walked in the door (at the Roosters) means I’m across what the competition’s all about.

“But if you were new to the philosophy and coaching methodology of the TAC Cup, I think it’d take you a long time to learn it.”

FitzGerald’s learning process started at the Roosters in 1997 and continued when he guided the 2005 and 2006 Rebels to second and first-placed finishes after those respective home-and-away seasons.

He said while the standard of the facilities at Eureka Stadium had greatly improved since then, some things hadn’t changed. Phil Partington is still the Talent Manager, the club’s connection to the region’s community is still strong and FitzGerald’s coaching method is still proving successful.

“I’ve had a deep-seated philosophy as a coach where I treat each of my players as individuals and develop knowledge of my players and staff,” FitzGerald said. “That can be a bit clichéd but it’s something I’ve been doing since I started coaching.