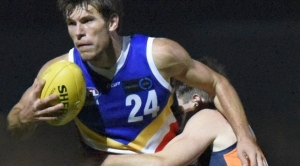 Daniel Short previews the Eastern Ranges Round 2 game against Western Jets, and takes a look at the other matches in the round.

Eastern Ranges coach Darren Bewick is looking to see a steep curve in the improvement of its top-age players this season.

Last year’s grand finalists gave some of its then bottom-age players some valuable experience on the TAC Cup Grand Final stage and is hoping for another step in not only their football but also leadership qualities in 2016.

“We’re obviously disappointed we lost the Grand Final last year but we had 10 bottom-age boys playing. So a fair bit of experience in terms of the competition,” Bewick said.

“They get the experience of the first year then we’d like to see them develop their leadership skills and that type of thing.

“When they’re on show to the AFL clubs and recruiters, (they want) to see a whole package. That’s really important that they’re able to display that.

“It’s still important to develop their footy more than anything and allow themselves to be seen in the best light each week they go and perform.”

Following a similar line of thought are the Western Jets. The Jets opting to take a lot of bottom-age talent into 2015 and develop them in the hope of having a “TAC Cup conditioned” group this season.

Coach Torin Baker is pleased with the decision and rapt with the progression of the group.

“We looked at last year’s group and we went with a lot of bottom-ages for the reason that they’ll be top-ages this year. So we were able to get games into a number of players last year, so we think they’re TAC Cup conditioned and really understand the style of footy we want to play,” Baker said.

“They should feel confident that a lot of them were able to perform as bottom-ages, especially towards the end of the year.

“We think from that point of view we’re a lot more advanced than say we were 12 months ago.”

Both sides failed to register a win in round 1, but with differing degrees. The Pioneers struggled against the impressive, yet inaccurate, Murray Bushrangers - going down by 68-points. Whereas Gippsland Power will be rueing its loss to the Stingrays, having led at three quarter-time as well as having three more scoring shots. Nonetheless, both clubs will be eager to taste victory this weekend.

After a close opening half, the Rebels succumbed to an impressive Geelong Falcons outfit. While Dandenong defeated Gippsland Power by 12 points. Two clubs that boasted top-end talent last season will again lock horns in what should be a close encounter.

Both sides enjoyed comfortable victories in their respective Round 1 encounters. The Bushrangers cruised to a 68-point win, while the Falcons ran out 28-point winners – which could’ve been more if it weren’t for some wasteful conversion.

The reigning premiers were trumped by the Western Jets last week, despite taking an eight-point lead into the final change. They travel to IKON Park again this weekend to take on the Northern Knights. The Knights will be disappointed with their opening round performance, and will be looking to bounce back from a 90-point Round 1 defeat.

The Calder Cannons fell short of an impressive Eastern Ranges outfit, going down by 41 points. They will be keen to notch up a first win of the season against the Dragons. Although Sandringham will be brimming with confidence off the back of its 15-goal Round 1 win.