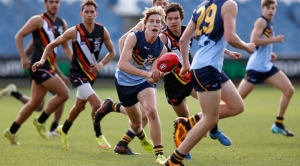 Making life’s big decisions isn’t something normally expected of high school students, but Sandringham Dragons midfielder Will Setterfield is hoping an important choice he made will pay off by the end of the year.

Some students might know where they want to work or what they want to study after they graduate. Many don’t. Regardless, the flexibility of modern careers means these decisions often aren’t life-defining.

Now put yourself in the shoes of a talented underage footballer.

If you have ambition to make it to the elite level, the statistics say the time to strike is just after you’ve left school – the majority of players taken in the AFL Draft and Rookie Draft are 18 years old.

The professionalism of the AFL means young draftees are increasingly expected to be ‘ready to go’. That means doing everything possible to prepare yourself for a career as an elite sportsperson, all while you’re at school.

For most Victorian kids hoping to play in the TAC Cup – Australia’s most successful underage competition in terms of players drafted to the AFL – they can do this while staying close to home. For those in other states who want to further their chances of making a career out of football, there’s a choice to make.

Take the cases of Jacob Hopper, Daniel Rioli and Yestin Eades, selected in the 2015 AFL Draft by GWS, Richmond and Essendon respectively. All moved to Victoria from interstate to play with the North Ballarat Rebels and put themselves in front of recruiters’ eyes in the hope of realising their football dream.

Big life decisions that have paid off.

This year, more will make similar moves. One of them, Albury native Will Setterfield, 18, relocated to Melbourne at the start of 2014 as a 15-year-old.

He decided to leave the family home to play football in the TAC Cup for the Dragons and attend Caulfield Grammar while living in a boarding house.

“It was my move, really,” Setterfield said. “My parents didn’t really initiate it; it was really up to me, and I was keen to come down to Melbourne and see what it was like.

“Footy’s much bigger down here than back home. That was the main reason, and then mum and dad thought it would’ve been a smart move for the education as well.

“You do feel like you’re a bit different to all the city boys, but you get used to it living in a boarding house.”

Setterfield, a member of both the AFL and GWS Academies, was lucky to have relatives living in Melbourne and a cousin – Fergus Huntington – playing at Sandringham when he arrived.

They helped him make an easy transition to his new home base in 2014. But things became more difficult last year.

The 189cm utility who relied on his strong endurance base to cover the football field suddenly wasn’t able to fully do what he does best – run.

Setterfield discovered a bone lesion in his knee was what had been causing him pain in certain places while running. He had surgery to shave it off and his leg muscle wasted away as the associated rehabilitation prevented him from playing with the Dragons in 2015.

“It was a long process,” Setterfield said of his recovery.

“With the injury, I spent a lot of time thinking without doing much but still having to travel to Sandringham games, and footy and school got a bit more serious.

“It was a bit of a hard year but it was still worth it.”

Encouragingly, Setterfield is having “no trouble” with his knee now. He participated fully in the AFL Academy’s high-performance US training camp in January and starred on debut in the Dragons’ Round 1 win against the Northern Knights with 22 disposals, nine tackles, seven clearances and two goals.

Sandringham Talent Manager Ryan O’Connor said he was “really impressed” by Setterfield’s ability to handle his injury issues away from his family.

“Rehab days are always up and down,” O’Connor said.

“I think any young player has down days; it’s being able to acknowledge that and being able to stay on track. I wouldn’t say he was immune to those down times and the frustration of it all, but I think he’s got a strength of character that handles it regardless.

“I think that’s one of his strongest suits.”

O’Connor said he was excited to see what Setterfield could produce in 2016, when he’ll look to again play in the AFL U18 Championships after three matches with NSW/ACT as a hard-running wingman last year.

According to O’Connor, the Dragons will seek to expand the game knowledge of their “modern-day player” by using him more often as an inside midfielder and in roles closer to goal.

After the decisions he’s already made in life, adapting to new on-field situations shouldn’t be too difficult for Setterfield.

“I don’t know whether it’s the country background, but he’s just a very down-to-earth kid,” O’Connor said. “There’s not a lot of nonsense about him and there’s a hell of a lot to like.

“Going forward at an AFL club – should everything go to plan – I think it means he’s going to be a really good teammate and clubman.

* Photo: Will Setterfield gets a handball away for NSW/ACT during the 2015 U18 Championships

Academy channels the champs on US camp