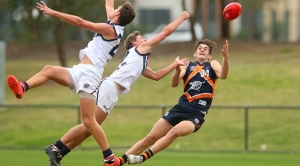 The Murray Bushrangers and Dandenong Stingrays are the last teams still undefeated in 2016 after the weekend’s Round 3 TAC Cup action.

Murray prevailed by 13 points in a slogging battle with the North Ballarat Rebels on Sunday to retain top spot on the ladder with a healthy percentage of 189.

Despite final scores of 7.17 and 5.16, conditions were indeed fine at Ikon Park – it was just poor skill execution that limited the ability of each team to pile on the points.

In one of the more bizarre quarter-time scorelines, the Bushrangers had only six behinds on the board while the Rebels had three. A relative scoring feast ensued from there, with Murray overcoming a three-point half-time deficit to hand last year’s minor premier North Ballarat a 0-3 record.

Dandenong holds second position on percentage after a 61-point win against the Bendigo Pioneers at Shepley Oval on Saturday. The Stingrays set up the victory with a barnstorming nine-goal first quarter, establishing a 44-point lead that Bendigo couldn’t get close to.

Meanwhile, the Sandringham Dragons and Oakleigh Chargers are even on premiership points with the ladder leaders but have played one extra match.

Sandringham had to weather a fierce final-term comeback from the Western Jets to hold on by 10 points at Burbank Oval on Saturday.

The Dragons looked to have the game sewn up after a five-goal-to two third quarter gave them a 33-point advantage at the last break but the Jets didn’t die wondering, again demonstrating their improved competitiveness this year.

Reigning premier Oakleigh also claimed its third win of 2016 in the Grand Final rematch with the Eastern Ranges at Bayswater Oval on Friday night.

Despite missing several key players due to school football commitments, the rivals staged another tough, close-run contest after the Chargers claimed the 2015 flag by 12 points in September. This time around there were just 16 points in it, Oakleigh making the decisive move by kicking five goals to one in the third term after an even first half.

The Geelong Falcons are now equal on two wins with the Ranges after accounting for the Gippsland Power by 93 points at Simonds Stadium on Saturday. The Falcons held the winless Power to just one goal in the first half and four majors for the match en route to victory.

Also on Saturday, Queensland and the NSW/ACT Rams continued joyless starts to the season for the Northern Knights and Calder Cannons respectively.

Northern couldn’t overcome a 29-point three-quarter-time deficit against Queensland at Preston City Oval, eventually going down by 17 points, while Calder left it all too late for a big comeback victory for the second consecutive game.

The Cannons lost to NSW/ACT by just six points at the aptly-named Rams Arena but will be kicking themselves for giving up a 40-point lead to their opponent by the final change. They also lost to Sandringham by 12 points in Round 2 after trailing by 41 at three-quarter time.