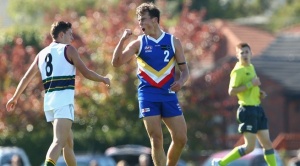 The Eastern Ranges and Geelong Falcons have set up a significant clash at Avalon Airport Oval this Saturday after both teams recorded big wins in Round 4.

The Ranges gave an injury-depleted Tasmania a rude introduction to TAC Cup football in 2016, defeating the Mariners by 81 points at Box Hill City Oval on the back of an 11-goal-to-three first half.

The Falcons, meanwhile, proved too strong for the Northern Knights at Simonds Stadium, breaking free of their pesky opponents in the final quarter by booting a massive 10.6 to Northern’s two goals to record a 67-point victory.

Both Eastern and Geelong now hold records of 3-1 and, positioned in 5th and 6th on the ladder respectively, enter what could prove to be an ‘eight-point game’ come the end of the home-and-away season.

The teams met in last year’s finals series, with the Ranges upstaging the Falcons in a semi final by 54 points en route to the Grand Final. This weekend’s result could have a significant bearing on when exactly these likely top-eight teams clash in September this year.

Last season’s minor premiers the North Ballarat Rebels haven’t found the going as easy in 2016, finally notching their first win against the Calder Cannons at Rams Arena on the weekend.

The 59-point triumph was head coach Gerard FitzGerald’s first of his new tenure at the Rebels (he also coached the club in 2005-06), with his charges piling on 10 goals to three after half time to keep Calder’s winless start to the season going.

Also still winless in 2016 is the Gippsland Power, which couldn’t match the undefeated top-of-the-table Murray Bushrangers at Ikon Park.

Gippsland was behind the eight-ball from the start, conceding a 21-point advantage to the Bushrangers by quarter time which extended to a 33-point margin at the final siren.

Just behind Murray on the ladder are the much-improved Sandringham Dragons. After a ninth-placed finish in 2015 (six wins and a draw), the Dragons already have four wins on the board this year after accounting for the Northern Territory in the state’s first TAC Cup game of 2016 by 73 points at Trevor Barker Beach Oval.

The Dandenong Stingrays are still undefeated in third position following an entertaining victory over a gallant NSW/ACT Rams outfit at Frankston Oval. The Stingrays looked to have killed off NSW/ACT’s chances several times in the second half, but the Rams always seemed to find a way to answer and eventually only succumbed by 15 points.

The Oakleigh Chargers occupy fourth spot on the ladder after winning a second consecutive Friday night match, this time against the Bendigo Pioneers at Queen Elizabeth Oval. Despite leading by 26 points at the last change, Oakleigh’s late inaccuracy (kicking just five behinds in the final term) kept the Pioneers in it, but Bendigo couldn’t bridge the gap and ultimately went down by 13 points.

In Round 4’s other match, the Western Jets lost their third straight game, falling to Queensland by 28 points in hot and sunny Aspley.