Peters’ pain now in the past 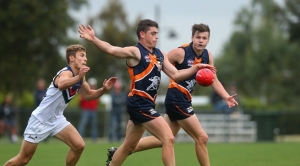 Calder Cannons mid-forward James Peters last year suffered a lower leg injury that sent him into shock right then and there on the football field.

Peters, now 18, jumped up in a marking contest against the Eastern Ranges in Round 3 of the 2015 TAC Cup season and came down awkwardly – very awkwardly.

“I’m a bit blurry on what actually happened, but I went up in the marking contest then fell down and looked at my leg, and it was a bit sideways,” Peters said.

“I dislocated my ankle and separated two leg bones. I had a fracture in my fibula and tore a couple of ligaments as well.”

Peters was invited back to Calder as an over-age player in 2016 and the fact he has played in four games this season is remarkable given the state he was in only 12 months ago.

“At first I thought I might have pulled a muscle in my lower leg like my Achilles or something, and then saw my ankle and sort of went into shock straight away,” Peters said.

“It just felt fake. It was a very weird feeling – almost as if it was a dream. You look down and you don’t know what to do, but luckily all the trainers were there and they really helped me out a lot.”

The Aberfeldie junior had never suffered a serious injury before and while dealing with the initial shock was difficult, coming to terms with the longer-term consequences was something else altogether.

“At first I was quite down to be honest,” Peters said. “You just think the worst – that the dream’s over.

“I just didn’t really know where to go from there but Mum and Dad were really helpful, as well as my sisters. They kept me in a positive mindset for the first few weeks and then I was all good.”

Peters said staying involved with his club was crucial in keeping him positive about the situation. He would attend Calder training sessions as often as possible and relished seeing some of his mates playing well as the Cannons made it to an elimination final.

“Kytey said early last year: ‘Just get your ankle right and you can play again next year’, so I knew pretty early on I was going to play (in 2016),” Peters said.

“That was really good for me; I could focus on just getting the ankle right.

“It doesn’t hurt any more so it’s time to move on I guess.”

On exposed form this year, Peters has certainly left his injury in the past. After returning to the Calder team in Round 2, the 180cm dynamo has used his agility, pace and nous around goal to great effect.

Playing in a forward role and rotating through the midfield, Peters kicked six goals in three matches and averaged 18 disposals, five marks, four clearances and four tackles per game before suffering a broken jaw in the first quarter of the Cannons’ win against the Gippsland Power in Round 5.

He’ll sit out at least the next six weeks of football with the injury, but said the simple enjoyment of physically being able to run out onto the field again had contributed to his good form to start the year.

“You almost don’t appreciate it enough when you’re playing until you have a long-term injury and you realise how much fun you’re having with your mates,” Peters said.

“There’s nothing much better I think.”