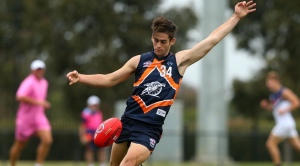 Calder Cannons forward Karl Brown has repaid the club’s faith in him with a match-winning nine-goal haul against the Gippsland Power in Round 5.

Brown was invited back to Calder as an over-age player this year following an enigmatic 2015 season, and was a key factor in the Cannons notching their first victory of 2016 on Saturday. The 193cm Essendon Doutta Stars junior booted five majors in the first term at Morwell Recreation Reserve to help his team open up a match-defining lead.

Brown demonstrated his goalkicking ability last year with 36 goals in 11 TAC Cup games, including bags of eight and six. Talent Manager Ian Kyte said Brown had turned things around ahead of his second year in Calder’s program.

“He’s lost about 15kg over the two years and is now looking like he might fulfil that potential he showed in previous years but probably wasn’t working as hard as he could,” Kyte said earlier in 2016.

“I think Karl will be one who’ll be talked about by people as the year goes on.”

In other key stats last weekend:

42: Harrison Burt did everything he could to try to get the Sandringham Dragons over the line against the Murray Bushrangers, racking up 42 disposals – 15 more than the next highest disposal-winner on the ground. The Ormond product also had game highs in contested possessions (18) and clearances (11), but his Dragons could only manage to split the points with the Bushrangers.

105: The key to the Geelong Falcons’ victory over the Eastern Ranges was in their slick ball movement. Eastern had one more mark than Geelong for the match but the Falcons had 118 more disposals. That was on the back of the winners clearly being more willing to move the ball on quickly, recording similar kick numbers but 105 more handballs than the Ranges.