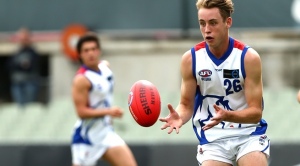 Oakleigh Chargers suffered its first loss since round 1 at the hands of Northern Territory last week, despite hitting the front early in the final term, as Daniel Short reports.

The Chargers are still in search of week to week consistency according to coach Michael Stinear, but he was buoyed by the fight displayed on the weekend.

The club has also exposed 56 players to TAC Cup football over the first six rounds, with key-defender Riley Jones the only player to of featured in all six outings.

“Northern Territory got us on the back foot at the start … to their (our players) credit they worked their way back into the game. (We were) 24 points down at three quarter-time, within 11 minutes we hit the lead. So it was a case of getting there too early. Rather than continue on the way we were, we just took the foot off and let them back in,” Stinear said.

“10 or 11 minutes of footy and they’ve scored over five goals to nothing. Definitely some good signs there but still plenty to work on.

“In terms of cohesion and our communication on field and guys being on the same page - there’s massive room for improvement. Certainly our best footy’s still ahead of us.”

The Chargers travel to take on the North Ballarat Rebels, who have hit some good form in recent weeks.

Coach Gerard FitzGerald has been pleased with the steps taken over the past three weeks that has seen a competitive effort against the undefeated Murray Bushrangers and two victories.

One standout performer has been Hugh McCluggage. The damaging midfielder has been named the Rebels’ best in all three of his matches, none more impressive than his 36 disposal and five goal game last weekend.

“I thought against the Bushrangers, defensively we were very good … just offensively we couldn’t impact the scoreboard,” FitzGerald said.

“The last two weeks we’ve been good both offensively and defensively so we’ve got the balance right.

“He’s (McCluggage) playing consistently well, which is good. What I like to see is that your better players are consistently playing well – I tend to rate that as a (important) criteria.

“He’s a good learner and a very good listener and hopefully we can continue to improve him.”

In other Round 6 games:

Dandenong moved to the top of the ladder following its convincing  54-point win over the Western Jets. The Stingrays are joined by Murray Bushrangers as only teams with undefeated start to the season. They take on the Northern Knights, who in contrast to the Stingrays, brought up their first win of 2016 last weekend  against Tassie Mariners.

Up by just two points at half-time, the Falcons pulled away from the Eastern Ranges in the second half to claim a 22-point victory and move to fourth on the ladder. The Western Jets have lost four in a row, and will be looking forward to less windy conditions than they found at Burbank Oval last round.

The Ranges sit 3-2 with its three wins accompanied by some close losses - highlighted by its percentage of 144.3. It faces the Bendigo Pioneers who haven’t won since Round 2, its only win of 2016. It will be eager to add to the win column at Kyabram Recreational Reserve on Saturday.

Calder Cannons brought up its first win of the year against Gippsland Power by 52-points last week, after a brilliant opening half kicking 11 goals to four. Karl Brown booted nine majors for the match. THeir opponents endured the first draw of 2016 with the Sandringham Dragons, after the Bushrangers led by a goal at three-quarter time before a tense final term.

Gippsland Power remains without a win, after a Round 5 loss to Calder Cannons last weekend. Things don’t get any easier this week as they take on Sandringham Dragons. The Dragons fought out a draw with the Murray Bushrangers, having kicked 6.13 in the first three quarters. They straightened up with  four straight goals in final term to share the points.