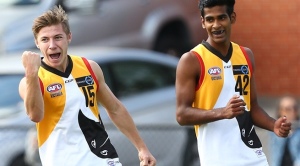 The undefeated Dandenong Stingrays couldn’t be happier with its 6-0 start to the year, as Daniel Short reports.

The Stingrays have been the TAC Cup’s best defensive unit but have improved upon is offense in 2016 according to coach Craig Black.

While sitting on top of the ladder, most things at Dandenong are travelling nicely, but Black has been rapt with the development of the attack. Two players in particular were on full display in the club’s 99-point win over the Northern Knights.

“We couldn’t be happier,” Black said.

“I always like having a strong defence, but the offence is up as well, which the last couple of years we’ve really struggled offensively, we struggled to kick big scores. But this year we’ve kicked some really big scores.

“He’s (De Koning) a tall developing 17 year-old so we didn’t put too much pressure on him.

“He jumps well at the footy and he can mark the ball on the lead and he can take a contested mark, so if you’ve got those attributes at that age it’s really exciting.

“He’s getting possessions as well, it’s his tackling, all the stuff you want to see these days to play AFL footy as a small forward.”

Dandenong faces the Murray Bushrangers who, after a strong opening month, has delivered a draw and a loss over the past fortnight.

The Bushrangers have lost some key players to NSW/ACT commitments - Fletcher Carroll, Ryan Garthwaite, Max Lynch, Todd Marshall, Alex Paech, Charlie Spargo and Zachary Sproule - but coach Leon Higgins said it is a “double bonus” for the club as five of its talent players so far have been given that opportunity.

While for the club, it gives it the chance to expose other players and potentially unearth a hidden gem.

“We’ve got five playing with New South Wales, that’s a great opportunity for them,” Higgins said.

“It’s a double bonus I think; it gives those boys the opportunity at the next level and exposes them to Nationals.

“And at our end it gives us an opportunity to play some more boys and expose them at TAC Cup level.

“When the National Carnival comes around I think every TAC Cup club in the competition will find one or two players that they probably wouldn’t normally have, without having that opportunity to play them.”

In other Round 6 games:

The Falcons dominated its first half against the Western Jets last week, up by 54 points at half-time to eventually win by 40 - stringing together its fourth straight victory. While the Cannons made it back-to-back wins last week, with an impressive performance against Murray Bushrangers. Karl Brown kicked another bag, this time six goals – giving him 24 for the season.

The Power remains winless, after a 49-point loss to the Dragons. But the club will be buoyed by the great form of Deven Costigan and Ethan East. While the Ranges have had a tough couple of weeks, enduring two tight losses. It will be looking to put its win-loss ratio into the positive on Saturday.

After a sluggish start, North Ballarat has won its past three matches and have moved to seventh on the ladder. They travel to take on the Knights who have just the one win next to their name and suffered a 99-point loss to ladder leaders Dandenong last week.

Bendigo Pioneers produced a great second half to claim a 21-point win having been down by a goal at the main change last week, to record its second win of 2016. While the Jets are still searching for their first win since round 1. It has struggled to find consistent form and will be hoping to rediscover that in its first of three consecutive matches at Burbank Oval.

SEE THE ROUND 6 BELOW: