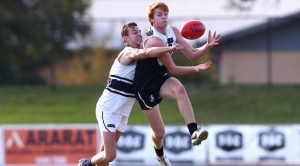 The Murray Bushrangers prevailed in one of the most thrilling finishes of the TAC Cup season so far on the weekend, inflicting the Dandenong Stingrays’ first defeat of 2016 by four points.

The result could also prove to be one of the most important of the season, as Murray’s win has opened up a six-premiership-point gap between the top four teams and the chasing pack.

Dandenong retained top spot on percentage from the Geelong Falcons despite the loss, while the Sandringham Dragons and Bushrangers are half a game behind. The North Ballarat Rebels, Eastern Ranges and Oakleigh Chargers are now a game and a half adrift of the competition pacesetters as the TAC Cup takes a weekend off.

Performances through these first seven rounds could prove crucial later, as many teams will soon lose their top-end talent to Vic Metro and Vic Country for June’s NAB AFL U18 Championships, which commence on the same weekend as Round 9.

Murray’s victory was secured when Billy Cooper booted the final goal of the game against the wind at Wangaratta Showgrounds. The Stingrays had taken the lead with the first two majors of the last quarter but couldn’t hold off a brave Bushrangers outfit missing several talented players to NSW/ACT’s Division 2 U18 Championships team.

Geelong drew level with Dandenong on six wins following a commanding 86-point triumph over the in-form Calder Cannons under lights at Simonds Stadium.

The Falcons killed the match off early with seven goals to one in the first quarter, and were 56 points in front by half time. The Cannons had rebounded from a winless start to the season with victories over Murray and the Gippsland Power in recent weeks, but this loss leaves them two wins behind seventh position on the ladder.

Just outside the top eight behind Calder are the Bendigo Pioneers and Western Jets on two wins apiece. The Jets claimed their first win since Round 1 against the Pioneers at Burbank Oval on the weekend, but it wasn’t without a major late scare.

Western blew an even game wide open with a dominant seven-goal-to-one third quarter, but could only watch as Bendigo piled on 5.5 to just two behinds in the final stanza to briefly put hearts in mouths. However, the Jets ultimately held on by 14 points.

In Round 7’s other matches:

- North Ballarat won a fourth straight game by keeping the Northern Knights scoreless in the first quarter at Preston City Oval, going on to prevail by 60 points; and

- Eastern continued Gippsland’s winless start to the season, recovering from conceding the first four goals of the game to defeat the Power by 50 points at Box Hill City Oval.

The Dragons and Chargers played their Round 7 match in April, with Oakleigh inflicting Sandringham’s only defeat of 2016 to date, to the tune of 32 points.