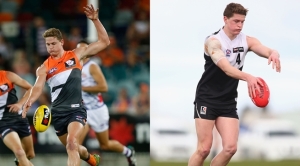 Ex-North Ballarat Rebels midfielder Jacob Hopper claimed the Round 8 NAB AFL Rising Star nomination for his stunning debut game for GWS in the club’s 91-point victory over Gold Coast on the weekend.

The Leeton, NSW product was taken by the Giants at pick no.7 in the 2015 NAB AFL Draft as one of their Academy selections after stellar performances in the TAC Cup and NAB AFL U18 Championships.

While attending St Patrick’s College in Ballarat, Hopper helped the Rebels reach a preliminary final last year by booting 26 goals in 12 matches and averaging 23 disposals and five tackles per game during the TAC Cup home-and-away season.

He was also named captain of NSW/ACT’s U18 team and earned selection in the 2015 U18 All Australian team for his prolific U18 Championships campaign.

GWS coach Leon Cameron said Hopper had made the most of an opportunity to step into the senior team following injuries to starting midfielders Ryan Griffen and Toby Greene.

“He’s had to earn his stripes in the NEAFL and I was really proud of Jacob who took his opportunity on Saturday,” Cameron said.

“He loves to tackle and loves to win contested ball and that’s all you can ask from a player coming into the AFL.”

Hopper is the sixth TAC Cup graduate to be nominated for the Rising Star award already in 2016.