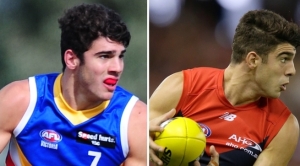 Former Eastern Ranges mid-forward Christian Petracca was rewarded for a good start to his elite-level career with the Round 9 NAB AFL Rising Star nomination.

Petracca, 20, was dynamic across half forward for Melbourne on Sunday with 21 disposals, six marks, seven tackles and five inside-50s in the club’s 63-point win against Brisbane.

The powerfully built Beverley Hills junior was sidelined through his first season last year with an ACL injury, but broke through for his first senior game in Round 6. He has played all four matches since, averaging 20 disposals, three marks and four tackles per game while booting 3.5.

Petracca was selected at pick no.2 in the 2014 NAB AFL Draft after a stellar year in which he was selected in the TAC Cup Team of the Year and U18 All Australian team. His U18 Championships campaign for Vic Metro also saw him awarded the Larke Medal as Division 1’s best player.

Petracca played three VFL games for the Casey Scorpions in April as Melbourne coach Paul Roos ensured the youngster built fitness and form before being given his chance at AFL level.

“Christian was made to earn his spot at senior level after his long layoff with injury,” Roos said. “We’ve seen him improve steadily each week in his first four games and it’s good to see his hard work pay off with a nomination.

“It’s a good sign of our development program that Christian is our third NAB AFL Rising Star nominee in the opening nine rounds of the season.”

Seven of this season’s nine nominees have now come through the TAC Cup system.