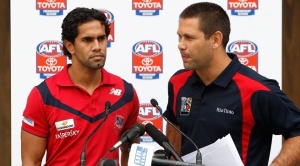 AFL Victoria has added a couple of former AFL champions to its ranks to help drive the development of the next generation of Indigenous players and coaches.

Johnson, 39, played 264 AFL games for Fitzroy and Brisbane between 1994 and 2007. He was a two-time All Australian, co-captained the Lions in his final season and was also named in the Indigenous Team of the Century. Post-playing career, he coached the Indigenous All Stars team in 2009 and has more recently been involved as a coach in national talent pathway programs.

“Chris is going to work with both Indigenous and multicultural talent predominantly at the 16 to 18-year-old age level,” Moloney said.

“He’s going to pick up the running of the Laguntas program for developing Indigenous players involving three camps and three games – two of which are against the Port Adelaide Aboriginal AFL Academy and one against Vic Country – and we’ll then run a version of that program for players of a multicultural background later in the year.

“Chris’ other key area will be related to a diversity coaching academy, which will be a coaching academy for both Indigenous and multicultural coaches to enter the TAC Cup talent pathway.

“He’ll be working on the recently-announced Next Generation AFL Club Academies to attract talent from non-football backgrounds as well.”

Davey, 32, enjoyed a 10-year, 178-game career at Melbourne from 2004-13, demonstrating his speed and skill in a variety of positions. After being born and raised in Darwin, he was taken by the Demons with pick no.3 in the 2003 Rookie Draft, graduated to the primary list and won a club best and fairest award in 2009.

Moloney said Davey’s background in employment, education and training through his work with the AFL SportsReady program would prepare him well for the role as Indigenous Programs Manager.

“Aaron’s role will have a focus on younger age groups,” Moloney said.

“He’ll be responsible for the U15 Kickstart program – which uses football as a vehicle for the personal development of Indigenous youngsters – both for males and females. This year we’re going to replicate the boys programs for the girls, and Aaron will be leading those programs.

“He’ll also look after community football Indigenous rounds and helping community clubs structure up their celebrations, which already happen now throughout the year as clubs or leagues do it off their own bat.

“Coaching strategy will be a part of his brief as well, but working more with younger coaches who are coming out of our programs at the U18, 19, 20-year-old level, and also helping them with gaining employment.”

* Photo: Aaron Davey (left) and Chris Johnson together in 2011