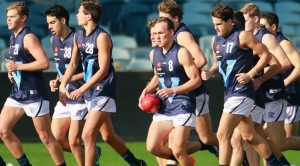 AFL Victoria’s Vic Metro Academy will take a different approach to its warmup for the 2016 NAB AFL U18 Championships, with a trial game against Werribee’s VFL Development League side tonight at Avalon Airport Oval.

The game will be the final trial to select the remaining members of the Vic Metro squad to contest the Championships in June.

AFL Victoria High performance Manager Anton Grbac said a number of factors had to be considered this year with the changes to the Championship structure.

Each Division 1 side will play another state once, and will also play against a Division 2 Allies side – with the Division 2 Championship being decided last weekend with NSW/ACT RAMS producing a clean sweep of its opponents.

“Due to the change in programming for the Championships, private school football consideration and most importantly the load that is placed on players at this time of the year with football and school-work, it was decided to make quicker choices on the core of the group (of the team) and then have a final trial with the remaining members to complete the squad,” Grbac said.

“We felt a physical hit out would best suit our needs and identified a VFL club that would be having a bye based on our timing.

“We approached Werribee FC who were excited about the idea and have been fantastic in their support of the concept.

“Special thanks to John Lamont, Mark Stone and of course Mark Penaluna for making their facilities available.”

The final squad for Vic Metro - supported by Dairy Australia - will be announced on Tuesday May 31. Vic Metro opens its 2016 campaign on Monday June 13 against Vic Country at Simonds Stadium.