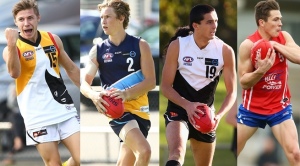 The 36-player 2016 Vic Country squad that will attempt to defend last year’s NAB AFL U18 Championships title has been announced.

While the full squad has been named, not all selected will get the opportunity to play during the Championships.

The Dandenong Stingrays contribute the most members to the squad, with 11 players coming from the TAC Cup ladder leaders. North Ballarat has seven representatives in the squad, followed by the Bendigo Pioneers with six, Gippsland with five, the Geelong Falcons with four and the Murray Bushrangers with three.

There are 15 members of the NAB AFL Academy Level One and Two groups in the Vic Country squad, with two Academy members missing out due to sustaining broken legs recently – Murray’s Jy Simpkin and Geelong’s Alex Witherden.

Bendigo’s Joseph Atley and Dandenong’s Liam McKay join Berry and Ainsworth as club captains included in the squad, ensuring there’ll be no shortage of leaders to follow in the footsteps of successful 2015 Vic Country captain and subsequent no.1 NAB AFL Draft pick Jacob Weitering.

Many eyes will be on midfielders Will Brodie (Murray), Hugh McCluggage (North Ballarat) and Myles Poholke (Dandenong), who have started 2016 in top form representing their TAC Cup clubs and the AFL Academy. Dandenong’s 192cm forward Josh Battle is another to have started the season well.

Battle’s forward-line teammate at the Stingrays, Sam Fowler – second on the TAC Cup goalkicking table – is the shortest member of the Country squad at 169cm, while ruckmen Lloyd Meek (North Ballarat) and Sean Darcy (Geelong) are the tallest at 201cm.

The Country squad will again be coached by Paul Henriksen, with Matt Battistello coming in to replace new Murray Bushrangers coach Leon Higgins as the Vic Country U16 coach.