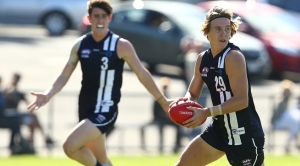 The Falcons are “buzzing” at the chance to take on ladder leaders Dandenong Stingrays this weekend in a mouth-watering top of the table clash, as Daniel Short reports.

The group will enter the match full of confidence having won its past five matches. Coach Andrew Allthorpe shared the sense of anticipation towards the clash and was adamant his side would have to be at its best if it is to make it six in a row as it travels to Shepley Oval.

“The boys have been buzzing the last week and a half, knowing they really get to challenge themselves against a quality opposition,” Allthorpe said.

“Pretty much after Calder finished we knew it was about getting bodies right and starting to prepare for Dandenong.

“The boys are up for every challenge we throw at them.

“Just consistency and four quarter effort (is what we’re after). The last couple of weeks we’ve started really well and dropped away in the second half.

“I think playing Dandenong on their home ground, it’s really important we do start well. I don’t think we’re going to be able to afford lapses at any stage during the game.”

One of a long list of talented Stingrays that Allthorpe’s side will face is Mason Dewit. The 193cm utility has been named in the best in five of his seven matches, playing a variety of roles across the ground.

Coach Craig Black has been impressed with Dewit’s development and was looking forward to the player’s response following its first loss of the season prior to the bye.

“It would’ve been great to play the following week to see how the boys react (to the loss),” Black said.

“(Mason) reads the footy extremely well; he comes from a basketball background.

“We’ve had to play him as a key defender at times where ideally he’d play half-back, wing or half-forward.

In other Round 8 games:

Both clubs are 2-5, with the Jets recording its second win last round against the Pioneers. The 14-point win wasn’t without concern, as Bendigo kicked 5.5 to two behinds to take a large chunk out of the 47-point three quarter-time margin in the final term. Nonetheless, it is four points. The Calder Cannons were jumped by the Falcons, a one-sided first half putting the result beyond doubt.

Fair to say not much separates these two sides at the moment, in fact there’s just 0.08 of a percent between them. Eastern Ranges were back on the winners list, with a 50-point win over Gippsland Power with 35 scoring shots to 15. The Rebels continued their hot form with a fourth straight victory of beyond six goals.

Sandringham continued its strong form, with its fifth win of the year to sit third on the TAC Cup ladder a nearly three weeks ago on May 7. The Bendigo Pioneers will be hopeful of continuing its momentum from the final quarter against the Jets a fortnight ago, storming home with 5.5 to 0.2 with the final term before time ran out – the Pioneers are searching for win number three.

The Bushrangers held strong in the final quarter of its clash with Dandenong, claiming a four-point win, with the victory keeping them in the top four and inflicting the first loss upon the Stingrays for 2016. Oakleigh has had three weeks to think about its Round 6 loss to North Ballarat.

The two bottom sides face off, with just one win between them for the season.. The Power has struggled to get within reach of most sides in 2016, and while it’s not all about results in the under-18 competition, it will be eager to improve the ledger. Equally the Knights have suffered some big losses, with its only win coming against the Tassie Mariners.