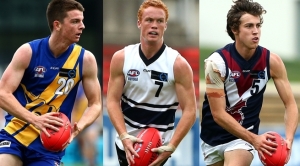 The 38-player 2016 Vic Metro squad that will seek to claim its first NAB AFL U18 Championships title since 2012 has been announced.

The Eastern Ranges contribute the most members to this year’s squad with 11 players. The Oakleigh Chargers have nine representatives, followed by the Sandringham Dragons with seven, Western Jets with six, Northern Knights with three and Calder Cannons with two.

Ranges big men Sam Hayes and Harrison Nolan join the latter five as bottom-age players in the squad, while Calder Cannons spearhead Karl Brown – equal-second on the TAC Cup’s goalkicking table – is the only over-ager included.

Many eyes will be on an exciting group of ball-winners integral to Sandringham’s early-season success including Corey Lyons, Andrew McGrath and Tim Taranto, while there’s a buzz around some of Western’s 2016 prospects following a lean 2015 season, such as Junker, defender Brodie Romensky and mid-forward Daniel Venables.

Vic Metro - proudly supported by Dairy Australia - will again be coached by David Flood and starts its Championships campaign against Vic Country on Monday June 13 at Simonds Stadium after a first-round bye.