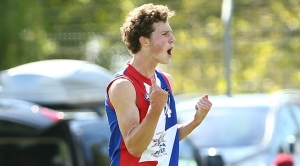 The Gippsland Power chalked up their first win of 2016 against the Northern Knights on Sunday on the back of some real potency inside 50.

Gippsland led from start to finish to prevail by 28 points in Morwell, despite being beaten by the Knights at the contests (-5 in the clearance and contested possession counts), with the ball in hand (-81 in the disposal count) and without the ball (-4 in the tackle count).

But when the Power did gain possession, they were powerful indeed.

That higher-risk game style didn’t come off on Sunday though, with the Power – and leading goalkickers Anthony Young and Nathan Voss (three majors each) – better rewarded for their long, direct ball movement.

In other key stats from Round 8:

87: The key to the Geelong Falcons’ comprehensive defeat of the Dandenong Stingrays in a battle for top spot was how they denied their opponents the ball. The Falcons limited the Stingrays to just 235 disposals – 87 less than their own count. No Dandenong player had more than 21 touches, while Geelong’s James Worpel had a field day with 30 – and that’s not to mention his 11 inside-50s, nine clearances and a goal.

6: In the same week he was named in the Vic Country squad for the AFL U18 Championships, Kayle Kirby had a massive influence inside 50 in the Bendigo Pioneers’ victory over the Sandringham Dragons. Kirby booted six of his team’s 13 goals, and to illustrate exactly how dangerous he was, he only had 12 disposals for the match – that’s a major every two touches.

See Kirby in the TAC Towards Zero TAC Cup Countdown this week: