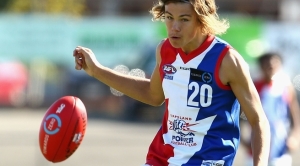 Gippsland Power notched up its first win of 2016 against the Northern Knights last weekend – a performance coach Leigh Brown felt the group was on the cusp of for a number of weeks, as Daniel Short reports.

Off the back of some promising periods in recent weeks, highlighted by the Powers opening term against the highly-touted Eastern Ranges, Brown is optimistic of building on last week’s 28-point win as the U18 Championships begin along with the continued development of the group.

“It’s probably been building for a few weeks, we had a couple of quarters against Eastern … and the training standards and energies been up for a fair while now. We thought there’d be a tipping point where we get the four points and the weekend was it,” Brown said.

“This competition changes so much, the teams change so much from week to week with kids in school footy and now with the Championships … you’re a chance every week against anyone.

“It doesn’t matter if we’re down the bottom we always think we’re a chance if we play the way we want to play.”

Gippsland meets one of the in-form sides of the TAC Cup in North Ballarat at North Port Oval, who have strung together five wins in a row after a 0-3 start.

had expected. But as we edge into the back-half of the season his side is playing as good a football as anyone.

“After having nine years in the VFL, post my two years in the TAC Cup, I’d just forgotten how little time you have with the boys.” FitzGerald said.

“In TAC Cup you probably have 15-20 minutes, once a week, to do pure situational game type training. I think it just took longer than I had imagined to get the boys to reproduce how you want them to play.

“There always is (something to work on).

“You’ve got to be careful when you win, you don’t paper over a crack that may be appearing.

“We were 37 points clear at about the 20-minute mark of the second quarter (against Eastern Ranges), three minutes to go we were two or three points clear.

“I didn’t think we were good defensively after half-time last week.”

It will be a homecoming of sorts for FitzGerald this weekend, the ground where his VFL North Ballarat side won numerous finals matches on its was to a three-peat of premierships, as well as the venue he coached at for a season back in 2004 at Port Melbourne.

In other Round 9 games:

The Ranges suffered an eight-point loss to the North Ballarat Rebels, which saw them drop to sixth spot and a third loss in four weeks. It will be eager to respond against a quality top four outfit in Sandringham. The Dragons were slow out of the blocks against Bendigo Pioneers and failed to reel back the four-goal buffer, registering its second loss of 2016.

The Cannons nearly produced a brilliant come from behind victory against the Jets, trailing by 22 points in a low-scoring affair going into the final term, they fell just two points short. They take on an out of form Oakleigh Chargers side, which lost its third match in a row. The Chargers were 19 points down at three quarter-time against the Bushrangers, before kicking 1.9 in the final term and made no further inroads to the margin.

The Jets won a thrilling contest with Calder Cannons, prevailing by two points to register back to back wins. It hosts the Northern Knights who last week lost to a Gippsland Power teaming producing their first win of the season. The Knights started slow and never pegged the margin back, going down by 28 points.

The Falcons continue to go from strength to strength, winning its sixth match in a row and claiming the mantle of ladders leaders after defeating the Stingrays last weekend. A 5.1 – 0.2 first quarter set up the 45-point win. As a result of last week’s results, Geelong now faces another top of the table clash, this time against Murray Bushrangers. The Bushrangers defeated Oakleigh Chargers by 19 points and have another big task this weekend.

Bendigo notched up its third win of the season, upsetting Sandringham by 35 points. The Pioneers will be looking for another upset as it takes on Dandenong Stingrays. Dandenong will be fired up and eager to bounce back after going down to Geelong Falcons last week. The former ladder leaders have now lost back-to-back games and slip to third at 6-2, and will be missing a host of players to U18 Championship duties.