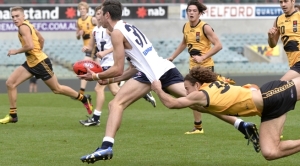 Vic Country faded late in suffering a 61-point loss to Western Australia in Round 1 of the NAB AFL U18 Championships on Sunday.

Country, supported by Dairy Australia, stuck with WA for the best part of three quarters at Domain Stadium in Perth, but three goals in the last two minutes of the third term and then seven goals to one in the final stanza saw the Sandgropers run away with the 19.11 (125) to 10.4 (64) victory.

192cm Dandenong Stingrays forward Josh Battle kept Country in the game early, booting three goals in the last three minutes of the first quarter and another just after the resumption of play to give his team the lead.

WA hit back to lead by nine points at half time and responded emphatically when Country drew to within four points at the 20-minute mark of the third term.

North Ballarat Rebels midfielder Hugh McCluggage was a stand-out in defeat for Country with 27 disposals and six marks, while Bendigo Pioneers captain Joseph Atley did well in close with 22 disposals and five clearances.

Country pipped its opponent in the disposal count but the game was lost at the coalface, with WA dominating contested possessions (+24), hitouts (+23) and clearances (+19). That dominance at the contests led to a lop-sided inside-50 count of 52-29, providing WA’s forwards plenty of chances to hit the scoreboard.

Vic Country now meets Vic Metro – playing its first game of the U18 Champs after a first-round bye – this Monday at Simonds Stadium from 12pm in Round 2.