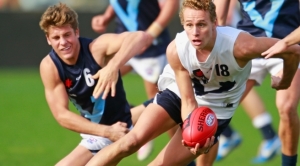 Vic Country will look to put last week’s defeat to Western Australia behind them, as they take on Vic Metro in Round 2 of the 2016 NAB AFL U18 Championships.

Country went down by 61-points to WA on Sunday in their first hit out of the season, after winning the championships last year.

Metro however, had a bye in the first round which allowed extra time to prepare their squad for the clash at Simonds Stadium, as James Szabo reports.

Although it was expanded final margin for Vic Country, they were in the contest till three-quarter-time, and there were a number of positives to come out the game such as some impressive individual performances.

Vic Country’s Josh Battle also made an impact with his four goals, following a dominant first half performance from the 192cm key forward, kicking the final three goals of the first quarter to get his side back in the contest.

Country coach Paul Henriksen said those particular players were not only important in their last game, but have already been vital in helping the inexperienced players around them.

“We took over ten players to Perth who had never played for Vic Country at any level before,” Henriksen said.

“So that group of core players (Atley, McCluggage and Battle) is what those ten inexperienced blokes probably look up to and see how they do things.

“That was really important for us as an academy – to take over some fresh kids and expose them to the level of a national carnival.”

Vic Country captain Jarrod Berry was also someone Henriksen highlighted as a crucial part of his team’s campaign. He said the decision to make him captain was an obvious one.

“Last year he was exceptional during the carnival and was also All Australian as well – I just think he takes on the leadership roles really well.”

Despite a Round 1 defeat for Vic Country at Domain Stadium, Vic Metro coach David Flood said his side is still expecting a tough contest when they come up against them on Monday.

“I watched the tape last night…and they’ve always got good footballers. A lot of their lads play senior footy which I think is great – it gives them a bit of an edge and an X factor.”

For Metro, co-captains Andrew McGrath (Sandringham Dragons) and Jordan Gallucci (Eastern Ranges) will be players to look out for during the Championships. The pair were handed the responsibility of leading the team for the season following a vote from the playing group last Sunday.

While he was happy to highlight certain players with leadership abilities, Flood says no individual is greater than the team.

“All of our players are just as important,” Flood said.

“It doesn’t matter what title they’ve been tagged with, it’s a team game and hopefully we’ll have a good team performance.

Flood said Monday’s clash with Vic Country is a great opportunity for his players, and while the rivalry adds something extra to the contest, his team will “get on the front foot, try and do their best and just treat it as another game of footy.”

Henriksen is looking forward to the game with similar positivity – explaining how highly regarded the game is considered by Vic Country.

“It’s the best game of Under 18’s football in Victoria for the year,” Henriksen said.

“You’ve got the best of Metro and the best of the Country playing against each other – there’s a healthy rivalry, but a great deal of respect as well.”

Vic Metro are looking to improve in this year’s campaign after winning just two of their six games last year, while Vic Country went undefeated in 2015, with both supported by Dairy Australia and its Legendairy campaign.

The clash takes place on Monday, June 13 at Simonds Stadium at midday. The game will be live video streamed via www.afl.com.au or follow @TACCup on twitter for updates.