Vic Country warm up for U16 Champs 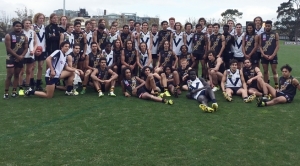 Vic Country U16 has prepared for the upcoming NAB AFL U16 Championships with a 59-point win over the Laguntas at Punt Road Oval on Saturday.

Country booted the first five goals of the annual hit-out, eventually running away with a 13.7 (85) to 3.8 (26) victory, as Georgina Cahill reports.

Murray product Hudson Garoni opened the scoring for the visitors, while Northern prospect Yemurriki Egan was the first to hit the scoreboard for Laguntas.

Country stormed ahead to a 25-point lead at the first break then wasted no time extending the margin in the second term.

They restricted Laguntas to one goal in the second quarter, while adding three to its score.

Accuracy was a highlight for Vic Country in the opening half, holding a 39-point lead at the main break.

The Matt Battistello coached Country side kept the Laguntas goalless in the third term, while extending its leading margin to 56-points at three-quarter time.

The Laguntas side, mentored by newly appointed coach Daniel Charles, lifted the intensity in the final term and applied relentless pressure on the visitors.

Eastern regions Leigh Pomponio slotted through the first goal of the quarter as his side hunted the ball and pushed their opposition.

However, it was too little too late as the towering Vic Country U16 line-up ran out 59-point victors.

Sandringham regions Jesse Firebrace, Murray’s David Smith and Ballarat’s Jamaine Jones were among the Laguntas best, while Murray’s Shepparton duo Jordan Butts and Ajak Dang, and Bendigo pair Jacob Atley and Jye Caldwell were strong for the winning side.

Vic Country U16 will face Vic Metro in the opening round of the 2016 NAB AFL U16 Championships on Sunday June 26 at Simonds Stadium (11:30am), before facing WA at Metricom Stadium on Monday July 4 and SA on Friday July 8 at Southport.

The Laguntas Program is a joint-initiative between AFL Victoria and Richmond’s centre for Indigenous youth, the Korin Gamadji Institute (KGI).