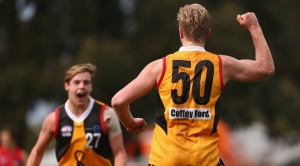 The Sandringham Dragons managed to escape from Preston City Oval with a hard-fought victory over the Northern Knights in a strange Round 10 match on the weekend.

Harrison Burt and Josh Trew stepped up with two goals each, while over-ager Goy Lok was also a key as the Dragons flew away from the Knights in the final quarter after trailing by two points at the last change.

The encounter was a dour scrap plagued by inaccuracy in front of goal to that point, with Northern leading 3.10 to 3.8 at three-quarter time. However, a relative goal feast ensued in the fourth term, as Sandringham unleashed with seven goals to three to maintain its game-and-a-half gap to the North Ballarat Rebels in fifth on the ladder.

The Rebels had won six straight games before their meeting with the Geelong Falcons, but couldn’t match the ladder-leaders in going down by 23 points at Eureka Stadium. It was Geelong’s eighth consecutive victory and another four-quarter effort that saw the Falcons extend their lead at every change.

North Ballarat is still two games and percentage clear of the Eastern Ranges in sixth, but has now lost its four games to teams above them on the ladder. Head coach Gerard FitzGerald’s group will be hoping to prove its credentials as a 2016 contender against the third-placed Dragons at Eureka Stadium on Sunday.

The two teams below the Rebels on the ladder met in Round 10, with the Calder Cannons recording a crucial triumph over Eastern by 32 points at Box Hill City Oval. The win drew the Cannons level with the Ranges on four wins and could prove vital should the race for finals spots be tight come the end of the home-and-away season.

This victory was built on the back of a potent Calder forward line, with four players booting three or more goals – led by Vic Metro squad member Karl Brown’s bag of four majors. Eastern, meanwhile, suffered from having seven starting players called up to Metro’s team to face SA at the U18 Championships.

The Western Jets also notched an important win in the context of the finals race, knocking off the Oakleigh Chargers for the second time this season by 33 points at Warrawee Park. Despite missing key players to the Vic Metro team, the Jets built on their lead in each quarter in one of their most complete performances of the year.

Like the Ranges and Cannons, both teams now sit on four wins, with Oakleigh in eighth and Western almost 11 percentage points behind in ninth.

- The Dandenong Stingrays were inaccurate against the Gippsland Power at Shepley Oval, but their eight extra scoring shots were the eight behinds that secured victory after trailing for much of the match; and

- The Murray Bushrangers were led to a 72-point win against the Bendigo Pioneers at Queen Elizabeth Oval by Esava Ratugolea’s eight-goal haul.