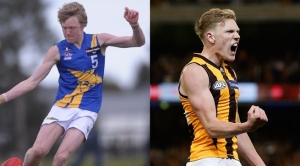 Sicily, 21, booted four majors in the second half – including the game-sealer – to help secure a nine-point win for the Hawks. He also had 13 disposals and five marks (three contested).

The Keilor junior was selected with pick no.56 in the 2013 NAB AFL Draft after kicking 26 goals in 16 games for the Jets and being named in that year's TAC Cup Team of the Year. He was one of the Box Hill Hawks’ best players in the 2014 VFL Grand Final in his first season at Hawthorn before breaking through for three senior games in 2015.

Sicily has played all 13 matches in 2016, seizing the opportunity opened up by Jarryd Roughead’s extended absence from the senior team. He has booted 19.11 and averaged 11 disposals and five marks per game, and is developing a reputation as a man for the big moments after also slotting the match-winning goal late in the Hawks’ Round 3 triumph over the Western Bulldogs.

“We have been pleased with James’ development,” Hawthorn coach Alastair Clarkson said of Sicily. “His most natural position is up forward, but he’s also been playing down back over the last few weeks and adding another string to his bow.

“Our depth is a great feature of our club and it is pleasing to see our younger players – including James – taking their opportunities at a senior level.”