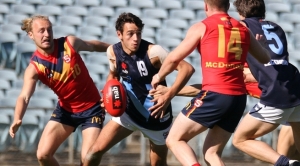 A win for Vic Metro against the Allies this Friday would go a long way towards handing David Flood’s team the 2016 NAB AFL U18 Championships title, as James Szabo reports.

Metro go into the game undefeated, after staging an incredible last-quarter comeback against South Australia on Sunday.

With all other teams having lost one game or more, a win on Friday would put Metro a game away from claiming the NAB AFL Under-18 crown.

The side were 35-points down at the last change, before kicking an impressive six unanswered goals to win the game by 3-points.

Metro - supported by Dairy Australia's Legendairy campaign - have now won both of their championship games after trailing at three-quarter time. Flood said the come-from behind win was all part of the plan.

“We knew we were up against a good outfit and we thought that if we could get them, we would get them in the last quarter,” said Flood.

“So I suppose it (the three-quarter time speech) was just about reinforcing that this was part of the plan and this is what we were sort of hoping for – to get into a positon to challenge South Australia in the last quarter.”

Flood admitted the six goal deficit was more than he’d hoped for at the break, but knew his side was still a chance after playing well all day and staying competitive in the first three quarters.

194cm Oakleigh Chargers forward Patrick Kerr became a hero in the last term, after getting his Metro side back into the game with four goals in 10 minutes.

While Flood was happy with the stand out performance from McGrath, he maintained his trademark attitude of focusing on team aspects rather than individuals.

“Everybody does their job and that allows Andrew’s game to shine as well. Andy’s an important player but so are all of our other players.”

Vic Metro go head to head with the Allies on Friday afternoon at Etihad Stadium from 2.35pm.

With Metro, South Australia and Western Australia all in contention to win the Championships, the game shapes itself as a fantastic opportunity for Flood’s side to edge closer to the title of best U18 side in the country.

The Allies went down by 17 points to Western Australia on Saturday afternoon at Domain Stadium. The side improved after a poor start to the game, but weren’t able to peg back WA’s lead.

Metro will be up against some familiar faces on the weekend, with eight TAC Cup players included in the Allies list.

Among these are Bendigo Pioneer’s Kobe Mutch (19 possessions last game), plus Murray Bushranger’s Zachery Sproule (13 possessions, 5 marks) and Todd Marshall (2 goals) - who were all included in the best players last game.

Brad Scheer 17 (disposals) and Harry Perryman (12 disposals) were also impressive for the Allies and stamped themselves as players to look out for.

Flood explained he will use the match as an opportunity to further improve his players and work on some of the things that haven’t gone well – such as winning just three of eight quarters so far these championships.

He also said that winning a game of football isn’t his main objective.

“It’s nice to have a win, but ultimately it’s trying to improve these lads and put them into a position where they’re playing in a good, healthy, safe environment - where they can play good footy.

“We just go in and do what we can do and hopefully put a few goals on the board.”

Vic Country, who went down to Metro in their last game by two points, could assist Flood’s side in winning the Championship title with a victory against South Australia this Friday. Murray Bushrangers forward Esava Ratulgolea comes into the team after seven goals in Round 10 TAC Cup action, as well as Cooper Jones from Bendigo Pioneers.

Country and SA will do battle at 12.25pm at Etihad Stadium, just prior to the Metro game.

Country will be out to collect their first points of the campaign, while South Australia are looking to keep their chances of winning the Championships alive with a win.

Both games will be live on FOX FOOTY.