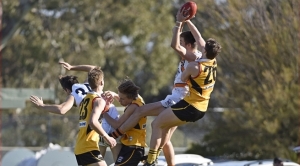 A remarkable comeback victory by the Sandringham Dragons over the North Ballarat Rebels may have sealed the top four spots on the TAC Cup ladder with six rounds remaining.

Sandringham’s four-point triumph at Eureka Stadium means fifth-placed North Ballarat is now two games behind the Dandenong Stingrays after Round 11.

The Rebels will be ruing a missed opportunity to defeat the Dragons and bring themselves within half a game of fourth position, giving up a 27-point lead midway through the third quarter.

The heroics of North Ballarat 16-year-old Jordan Johnston – who booted four goals in the first term and seven for the match – took a back seat as Sandringham charged in the second half, with Josh Trew slotting four crucial majors. The second-placed Dragons will now turn their focus to a top-of-the-table clash with the Geelong Falcons at Avalon Airport Oval on Saturday.

Dandenong’s 59-point loss to the Calder Cannons at Shepley Oval opened another crucial gap on the ladder, the result helping the Falcons move a game and a half clear on top of the table.

With a range of key players missing due to Vic Country duties at the NAB AFL U18 Championships, the Stingrays were jumped early by the Cannons, who created a 31-point advantage by the first break.

Sixth-placed Calder didn’t have any players missing to Vic Metro duties, with its two Metro squad members – Karl Brown (seven goals) and Hayden Blythe – both among the best players on Saturday.

The Falcons led by 16 points at three-quarter time but found a way to hold on and claim a ninth consecutive victory, while the Chargers have now lost their last six games after starting the season 4-1. Four of those losses have been by less than 19 points and seventh-placed Oakleigh will be looking forward to its nine Vic Metro squad members returning in the run home as they seek a third straight TAC Cup premiership.

The Eastern Ranges will also be keen to have their 11 Vic Metro squad members back, having lost a fourth consecutive match by seven points to the Murray Bushrangers at Albury Sports Ground on Sunday.

The game finished in unusual circumstances, with both teams recalled from their rooms to play six extra minutes after a timekeeping error resulted in the final siren being blown early. Luckily for the Bushrangers, they were able to back up their first ‘win’ with a second one six minutes of playing time later. The victory saw Murray jump Dandenong into third spot on the ladder.

- A six-goal-to-two third quarter set up the Gippsland Power’s second win of 2016 by 43 points against the Western Jets at Morwell Recreation Reserve; and

- The Northern Knights booted five goals to two in the final term to break away from the Bendigo Pioneers and prevail by 24 points at Queen Elizabeth Oval.

CLICK HERE to read the latest edition of the AFL Victoria Record, including a feature on Geelong Falcons forward Brett Blair