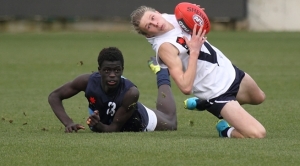 Vic Country made a winning start to its NAB AFL U16 Championships campaign on Sunday, defeating Vic Metro by 20 points at Simonds Stadium.

After leading by just seven points at half time, Country made a decisive break in the third quarter, booting four goals to one to set up victory.

Country and Metro – both proudly supported by Dairy Australia – now head to the Gold Coast for their remaining two fixtures against South Australia and Western Australia. Both teams will be in action on Monday July 4 at Metricon Stadium and Friday July 8 at Southport.