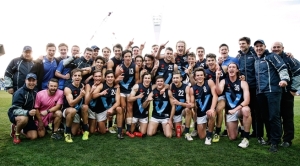 Vic Metro claimed its first Division 1 NAB AFL U18 Championships title since 2012 in defeating Western Australia by 23 points at Simonds Stadium on Wednesday.

Backing up the 2015 Vic Country team’s achievement, Metro went through the Championships undefeated, having also accounted for Country by two points, South Australia by three points and the Allies by 14 points.

Sandringham Dragons mid-forward Tim Taranto was dynamic with 24 disposals and got Metro off to the start it needed with the only goal of a first-quarter arm wrestle.

Eastern’s Callum Brown found plenty of the ball in the first half as Metro built a 12-point lead at the main break. He finished the game with 18 disposals and five tackles to be one of his team’s prime movers in the engine room, along with Northern Knights ball-winner Luke Bunker (25 disposals, six clearances), Ranges captain Dylan Clarke (23 disposals, five tackles) and Sandringham’s Andrew McGrath (24 disposals).

The third term belonged to Metro, with classy Eastern ball-user Jordan Gallucci’s first major (15 disposals and two goals for the game) kick-starting a four-goal-to-two quarter that set up the title-clinching victory.