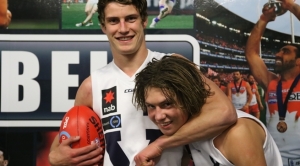 There is a distinct family flavour to this year’s Vic Country U18 and U16 teams, with brothers Jarrod and Thomas Berry captaining the sides throughout the 2016 NAB AFL Championships, as Kate Withers reports.

A long way from Horsham where they lined up in junior football together, the Berry brothers are together at the North Ballarat Rebels in the TAC Cup.

Rebels’ Talent Manager Phil Partington has overseen the development of Jarrod and Thomas at the Rebels, and says both boys have flourished in their roles.

Partington says elder brother and captain of the U18 Vic Country side, Jarrod, is an instinctive leader on and off the field.

“He hasn’t gone out of his way to be a leader, he’s a natural leader and he drives his own agenda.

“He leads with action and takes genuine care of his teammates.”

Captain of the Rebels in the TAC Cup, Jarrod is relishing the new challenges that came with leading the Vic Country U18 squad in the Championships that ended on Wednesday.

“It’s a tremendous honour (to be captain) and it’s been good fun.

“My main focus wass to get the boys to come together as a group.”

Thomas Berry will captain the U16 Vic Country alongside Oscar Brownless this year, and is thrilled to have achieved a long-standing ambition.

“I’m absolutely stoked to be captain,” says Thomas, “this was one of my goals and I worked really hard for it.

“He (Jarrod) has always been one to idolise for me; I pick out stuff that I like that I see him do and try to bring that into my own game.”

Though two years his junior, Jarrod says Thomas’ tenacious style of play and ability to lead by example is what set the two apart from an early age.

“Thomas was a little hard nut,” says Jarrod, “I used to just wait on the outside for the easy kicks while he got the hard ball.”

Full of praise for his little brother’s on-field bravery, Jarrod is quick to point out that Thomas’ grit doesn’t extend far beyond football.

“He has about seven different hair products and perfumes, and he likes his image.”

Vic Country U16s continue the NAB AFL U16 Championships on the Gold Coast next week.

CLICK HERE for the full squads and U16 fixture