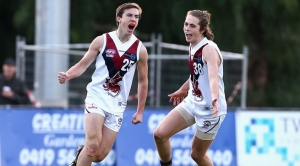 The Sandringham Dragons and Murray Bushrangers moved to within half a game of the ladder-leading Geelong Falcons after Round 12 of the TAC Cup.

Despite missing several Vic Metro representatives following the previous Wednesday’s final games of the NAB AFL U18 Championships, Sandringham accounted for Geelong by six points in a thriller at Avalon Airport Oval.

The Falcons had won nine straight games before Saturday’s match and looked intent on stretching that streak into double-figures when they kept the Dragons goalless in the first quarter and established a 15-point lead by half time.

Sandringham came out a different team after the main break though, piling on four unanswered goals to take over the lead – with 196cm 17-year-old Hayden McLean booting three majors for the term. McLean had his fourth early in the final stanza and another goal to Isaac Morrisby gave the Dragons (now 9-2-1) enough of a buffer to hold off a late Geelong (10-2) challenge.

Third-placed Murray (9-2-1) is now also just two premiership points behind the Falcons after defeating the Northern Knights (11th, 3-9) by 43 points at Wangaratta Showgrounds.

The Knights matched the Bushrangers in a high-scoring clash for much of the day, but Murray’s seven-goal-to-two final quarter blew the margin out. 19-year-old Lachlan Tiziani was again a star for the victors, slotting six goals and taking his tally from the last three rounds to 15 majors. James Cousins and Ben Paton were also influential inside 50 with three goals each.

The Dandenong Stingrays (4th, 9-3) maintained the two-game gap between the top four teams and the chasing pack by inflicting a big loss upon the Eastern Ranges (8th, 4-8) to the tune of 73 points at Box Hill City Oval.

The Stingrays were well served by 16-year-old Riley D’Arcy who booted four goals in his first TAC Cup match and a relative elder statesman in 19-year-old Tom Glen. The Ranges, meanwhile, will be desperate to get their group of Vic Metro representatives – including five U18 All Australian team members – back in action, having now dropped their last five games.

Eastern has a crunch encounter with fellow top-eight contenders the Western Jets (9th, 4-8) at Burbank Oval this week, a team that was unable to overcome the North Ballarat Rebels (5th, 7-5) in Stawell on Sunday.

The Jets trailed by 20 points at three-quarter time but kicked the first two goals of the last term to close to within five points of the Rebels. However, answering goals to North Ballarat full back Clay Bilney and then Jacob Wheelahan secured a 10-point victory for their team. The Rebels now meet the Murray Bushrangers at Rams Arena on Saturday in a crucial battle for their top-four hopes.

- The Oakleigh Chargers (7th, 5-7) ended a six-game losing streak in prevailing over the Gippsland Power (12th, 2-10) by 33 points at Morwell Recreation Reserve.

CLICK HERE to read the latest edition of the AFL Victoria Record, including a story on Northern Knights captain Mason Blakey