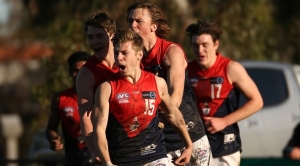 The Dandenong Stingrays pulled off one of the TAC Cup’s most remarkable comebacks of recent times in Round 13, pipping the Oakleigh Chargers by a point after trailing by 40 at three-quarter time.

The performance was all the more special with former players of the regions’ VFA teams in attendance at Warrawee Park to watch the new generation run out in the old colours of Oakleigh and Dandenong.

Vic Country small forward Sam Fowler (pictured, front) snagged three of the Stingrays’ seven final-term goals while teammate and best-on-ground medallist Dylan Atkins imposed himself in the ruck as the Chargers failed to halt the onslaught.

Returning Vic Metro players Taylin Duman, Jack Higgins and Sam McLarty were key parts of Oakleigh’s dominant first three terms but the eighth-placed Chargers will be ruing a game that got away. Their 5-8 record has them just one game in front of the ninth-placed Western Jets.

Dandenong, meanwhile, moved above the Murray Bushrangers into third spot with a record of 10-3 and now face a big clash with the second-placed Sandringham Dragons at Trevor Barker Beach Oval in two weeks.

The Bushrangers (4th, 9-3-1) kept the door open for the North Ballarat Rebels (5th, 8-5) to challenge for a top-four spot after losing to the Rebels by 27 points at Rams Arena.

Hugh McCluggage – Vic Country’s MVP of the NAB AFL U18 Championships – was exceptional for North Ballarat with 36 disposals and three goals, as his team broke open an even contest in the second half. The Rebels next meet the Calder Cannons at Eureka Stadium in two weeks in yet another must-win game in their quest to secure a finals double chance.

But the Cannons (6th, 7-6) won’t be easy to overcome after recording their fifth straight victory in Round 13, holding off the gallant Northern Knights by five points at Rams Arena.

Missing the TAC Cup’s leading goalkicker Karl Brown – who received a call-up to Coburg’s VFL team – Calder’s Lachlan Bramble stepped up to boot the winning goal after the Knights had rallied from 21 points down early in the final quarter.

Northern (11th, 3-10) hit the front through a Lachlan Murphy goal late in the match, but the Cannons responded instantly. The Knights were left to lament their inaccuracy in front of goal, only managing 2.10 through the second and third terms.

The Eastern Ranges (7th, 5-8) were boosted by the inclusion of several Vic Metro stars in a comprehensive 90-point victory over Western (9th, 4-9) at Rams Arena.

Metro co-captain Jordan Gallucci had 21 disposals and kicked five goals, while state teammates Dylan Clarke and Callum Brown were Eastern’s top disposal-winners in a crucial win for the its chances of securing a finals spot.

CLICK HERE to read the latest edition of the AFL Victoria Record, including a Multicultural Round feature on Murray Bushrangers key forward Esava Ratugolea