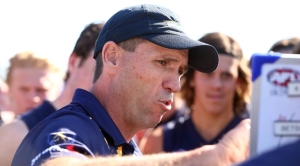 The Bendigo Pioneers and Geelong Falcons did battle on a bitterly cold day at Queen Elizabeth Oval on Sunday, but the Pioneers certainly didn’t freeze in the face of their opponents.

Bendigo brought the heat to the ladder-leading Falcons, recording an incredible 162 tackles in a 12-point loss in difficult conditions. So fierce was the home team’s pressure, the Pioneers had nine of the top 13 tacklers in the TAC Cup for Round 13.

Making up the competition’s top five tacklers for the round were bottom-age Pioneers trio Wade Donnan (17), Darby Henderson (15) and Tom Campbell (14).

Let’s not gloss over Geelong’s also-impressive total of 92 tackles – led by captain Jack Blood with 13 – but clearly Bendigo coach Brett Henderson had his 10th-placed team primed to show what it’s made of against one of the best outfits in the TAC Cup.

In other key stats from Round 13:

36: Brodie Romensky has played some quality football for the Western Jets this year as a defender, but the 189cm 18-year-old returned to the TAC Cup after representing Vic Metro and starred as an on-baller in Western’s big loss to the Eastern Ranges in Round 13. He had game-highs in disposals (36), handballs (24), contested possessions (24), clearances (12) and tackles (seven), and also booted a goal.