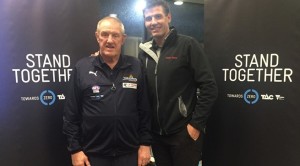 Ken Gilbee has been announced as the latest TAC Cup Legend, as part of the 25 years of TAC Cup celebration.

The Bendigo Pioneers volunteer was recognised for over 20 years of service to the club by former player Nathan Thompson at a Towards Zero Player Night on Tuesday.

Gilbee’s involvement extends back to 1996, and he has provided 20 years of continuous service and is a club life member.

There is barely a role he has not fulfilled at the club during his time involved, having spent periods as timekeeper, scoreboard operator, property steward. interchange steward, umpire escort, statistician, huddle banner operator and bus driver, just to name a few of his roles.

Age restrictions have hampered Gilbee pulling on the Bendigo Pioneers jumper as a player, and he has not spent time as coach – but his time at the club is not over yet!

Nathan Thompson returned to the TAC Cup club Hawthorn drafted him from, going on to play 119 games and kick 192 goals with the Hawks before moving to North Melbourne for a further 60 AFL games and 135 goals.

Thompson is one of many AFL players who have come through the TAC Cup, a partnership that builds leadership skills, including being a safe road user, as young people get a kick-start to their football and driving careers.