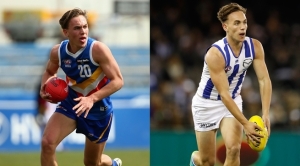 Clarke, 19, made his AFL debut in the Kangaroos’ Round 16 loss to West Coast as a late replacement for the injured Nick Dal Santo. He had 21 disposals against the Eagles and then 22 in a loss to Port Adelaide two weeks ago.

The Knox junior was selected by the Kangaroos with pick no.31 in the 2015 NAB AFL Draft after winning Eastern’s best-and-fairest award and being named in the TAC Cup Team of the Year. Clarke also represented Vic Metro at the NAB AFL U18 Championships and starred as a hard-running ball-winner in the Ranges’ run to the TAC Cup Grand Final.

"After being a standout for the first half of the season playing with Werribee in the VFL, he’s been an important part of our team set up since joining the senior side in Round 16," Scott said.

"He’s a true professional and it’s been exciting to see his development at the club since he was drafted in November last year. He has a really bright future ahead of him here at North Melbourne."