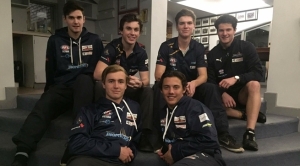 Six Bendigo Pioneers players are making the trip from Geelong to play home games at Queen Elizabeth Oval for their local TAC Cup team this year.

17-year-old Brander said he and his schoolmates wanted to help the Pioneers establish a winning culture and build respect for the club within the competition.

“(Talent Manager) Stephen Sharp and (head coach) Brett Henderson are trying hard to make the Pioneers more professional and get a real culture around the club,” Brander said. “We thought it’d be good for five or six of us to go back and try to help them build it a bit more and win a few games.

“We have some good players there, so if we win a few more games and gain some respect in the competition, I think that’d be good.”

The Grammar group trains with the Geelong Falcons once a week but represents Bendigo on the weekend. If the Pioneers are playing at home, Sharp will hire a car for the sizeable round trip to Geelong and drive them himself. Luckily for the boys, Brander said Sharp “loves a good chat, so he’s good fun” to share the ride with.

Brander joined Dow, O’Brien and Caldwell in the car two weeks ago to help Bendigo defeat the Oakleigh Chargers by 21 points.

The 195cm key-position player was one of his team’s best too, kicking two goals from 14 disposals and eight marks. Dow was highly influential with 26 disposals, eight tackles and seven clearances, while O’Brien had 23 disposals and Caldwell made his TAC Cup debut as the 23rd player. Sharp would have felt his efforts were justified.

He’d also be thankful Brander has managed to overcome a torn meniscus in his knee sustained at the NAB AFL U16 Championships last August that kept the Level One AFL Academy member out of action until April.

“I haven’t had a pre-season in a few years, so my next goal is probably just getting really fit,” Brander said.

“I have an alright endurance base, but I’d like to do a full, AFL-like pre-season and hopefully play for NSW/ACT next year and make the Allies squad (for the Division 1 U18 Championships).”

Brander is also a member of the GWS Academy and recently played a NEAFL game for the Giants’ reserves team. While he thinks he didn’t play “overly well”, the experience of being in the inner sanctum of one of the AFL’s hottest clubs was one to remember.

“It was really weird,” Brander said. “Seeing all the AFL-listed players walking around, you’re just thinking: ‘I don’t know what to do.’ Warming up and doing everything like an AFL player would was pretty unreal.

“On the Friday night before the game, all the first-year players like Matt Kennedy, Matt Flynn, Harry Himmelberg and Jacob Hopper took us out for dinner, and we also met (GWS coach) Leon Cameron which was good.”

Brander has the on-field versatility to play at either end of the ground (he often plays in defence for Geelong Grammar), and with plenty of distance to be travelled between football appointments this year, it seems his versatility off the field is proving one of his biggest strengths too.