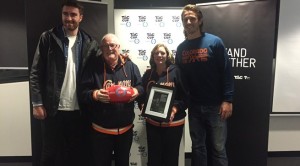 Alan and Anne Croughan are the latest TAC Cup Legends. The Calder Cannons couple could not be separated as the clubs’ Legends, as part of the 25 years of TAC Cup celebrations.

Both are Life Members of the Cannons, having been an irreplaceable part of the club since 2000. Across over a decades commitment to the club, the pair have taken on a multitude of tasks, from organising drinks at the breaks for the boys to Thursday night dinners and after match functions, helping out with stats or property when short staffed, ensuring players are looked after and with their families when injured, or just passionately barracking from the sidelines at every game. Alan is also the Parent Liaison and Welfare Officer at the club, working closely with the Calder players throughout each season to ensure they are supported throughout all aspects of their lives.

The Towards Zero Player Night saw the return of former Calder pair, Richmond recruits Ivan Maric and Liam McBean. They are just two of 91 players the Croughan’s have seen come through the TAC Cup club during their time and recruited to the AFL. The TAC Cup pathway and ongoing support of TAC is a partnership that builds leadership skills, including being a safe road user, as young people get a kick-start to their football and driving careers.

Each TAC Cup club is recognising their local legends this season for their contribution to the long running success of the competition and welcoming former players back to the clubrooms.

The 25 year partnership with the Transport Accident Commission also takes on a new mantra as the clubs commit to stand together towards zero deaths and serious injuries on the roads.